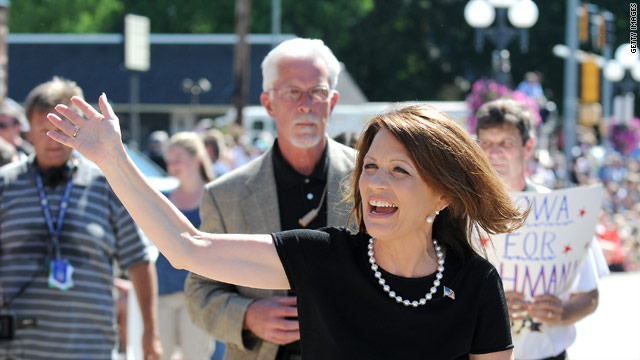 Second Iowa poll in as many days has Bachmann on top

(CNN) – For the second straight day, Republican presidential candidate and Rep. Michele Bachmann's at the top of a new poll of likely Iowa GOP caucus goers.

According to a survey from the American Research Group, 21 percent of people questioned say they are backing the congresswoman from neighboring Minnesota for the GOP presidential nomination in their state's caucuses. Bachmann was at nine percent in ARG's April poll.

In second place at 18 percent, and within the survey's sampling error, is former Massachusetts Gov. Mitt Romney, who's making his second bid for the White House. Rep. Ron Paul of Texas, who's making his third run for the presidency, is in third place at 14 percent, followed at 11 percent by former Alaska Gov. Sarah Palin, who hasn't decided whether she'll launch a presidential campaign. Every one else is in single digits.

The ARG poll follows by one day an IowaRepublican.com survey which indicate put Bachmann at 25 percent, with Romney at 21 percent.

Both polls follow a much reported recent survey from the Des Moines Register which had Romney at 23 percent and Bachmann at 22 percent. That poll sparked some favorable stories for Bachmann, who earlier in June received positive headlines for her performance at the much watched CNN/WMUR/New Hampshire Union Leader GOP presidential debate.

(CNN)-Saying "the time is right" because more people agree with his positions, Rep. Ron Paul of Texas on Friday announced his candidacy for the Republican presidential nomination.

The long-time lawmaker, who was first elected to the House of Representatives 35 years ago, says he's optimistic about his chances and that his "supporters are enthusiastic."