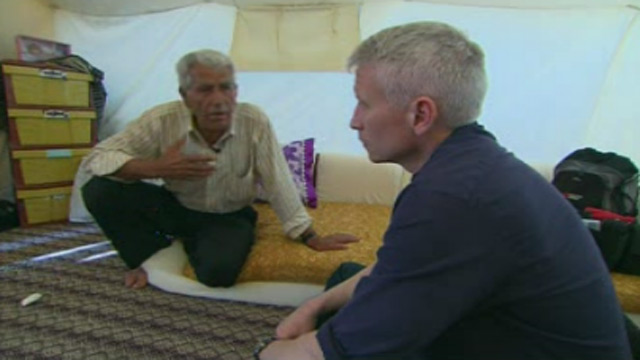 Anderson Cooper speaks with a Syrian refugee named Abu Mohamed. Two of his sons were killed and one is missing.
May 14th, 2012
02:15 PM ET

Editor's note: Fouad Ajami traveled to Turkey with Anderson Cooper to meet Syrian families living in refugee camps after escaping attacks in Syria and fleeing across the border. He shares more of his expertise during a special edition of AC360° at the border of Syria and Turkey at 8 and 10pm ET tonight.

Abu Mohamed extended Anderson Cooper an invitation of hope: he wanted his guest, who had come into his tent on the outskirt of Antakya to chronicle the ordeal of Syria's refugees, to visit him in his beloved home, in Jisr al Shughur. "Please come and see us in fulfillment as you have seen us in our grief." The proud man in his mid 60's whom I had known from earlier visits was apologetic. There were the codes of hospitality from his beloved Syria. He wanted me to render his thoughts in English to the visiting American journalist; he was sure that the truth of his country was not understood in foreign lands.

The regime back home, he said, had depicted the town of Jisr al Shugur, an achingly close agricultural town a little more than a dozen miles away from this tent city of some 1,600 people, as a hotbed of religious fundamentalism and a home for terrorist groups. "Nothing could be further from the truth. We were a peaceful people who tended our work, who loved our country. There was hardly a hunting rifle in Jisr al Shugur. The weapons you can buy in stores, on street corners in American cities, were not available in our town."