[cnn-photo-caption image=http://i2.cdn.turner.com/cnn/2008/images/07/14/art.tiltedobama.jpg width=292 height=320]
Gina McCauley
Blogger and founderOh yes folks, Liberal creatives are having a field day this election season with their depictions of Michelle Obama. Proving that you can revel in racist depictions of Black people as long as you have a really good reason.

We previously showed you a "satirical" piece where Michelle was depicted being lynched by the Klan( Michelle Obama Depicted Being Tortured: Liberal Bloggers Lose Their Ever Loving Minds)

Now they are back at it depicting her as a terrorist rocking an afro and a machine gun. Barack Obama offered his standard response: None at all. (the campaign later issued a statement after his initial non committal response)I am beginning to see the wisdom of his silence, this is going to go on and on and on for the next five months he might as well save up for October:

Editor's Note: Gina McCauley is the founder of Blogging While Brown, Michelle Obama Watch, and What About Our Daughters?

What does July 4th mean? 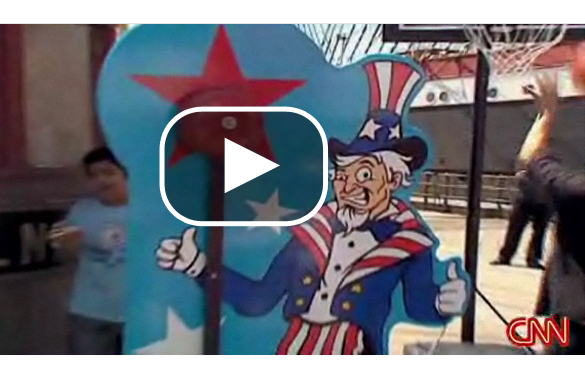 Happy 4th of July, 2008! Check out this report from our Richard Rother. 232 years later, Richard goes searching for what July 4th means today...

I firmly believe that at this point in the Democratic primary nomination there is no such thing as an undecided superdelegate. Instead, what we have are undeclared superdelegates.

These remaining 300 or so people all very likely have a candidate they personally prefer, but are just waiting for the right moment to make it public. One of the key things they are waiting for is the result of tomorrow's Pennsylvania primary. So what are potential Obama and potential Clinton superdelegates looking for tomorrow?

Those who are decided for Senator Clinton but have not yet announced, are looking for a large win to show that she has the potential to remain an active player in this race. They want to see a decisive victory of at least 10 points.

The same thing goes for those decided for Senator Obama but not yet pledging support. Pennsylvania has always been an uphill battle for Senator Obama. So while a loss would be disappointing, a narrow loss would be seen as a positive in a state where Clinton had been heavily favored. It would indicate his recent problems have not really hurt Senator Obama's electability and that he still remains a viable player in big swing states.