Storm chaser Brandon Culkin tells Anderson Cooper how one tornado overtook his truck and flipped it over several times. 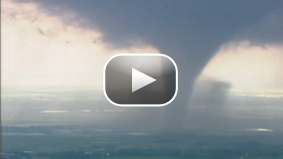 Incredible! What a weekend.

In all my years as a professional meteorologist and spending my younger years living in tornado alley, I have never witnessed anything near the unpredictable, awesome power of the tornado that crawled across Hennessey, OK on Saturday. I was watching north central Oklahoma for the threat of tornadoes and a warning was issued for Kingfisher and Garfield counties. Next thing I know, my newsroom executive producer is running over telling me to get hooked up, we have live chopper shots of a possible tornado; they want me on the air.

We broke into programming just before 3:30p.m. EDT. Along with our CNN audience, I witnessed a large rotating wall cloud with a slight lowering. It turned into a funnel that gradually lowered to the ground and became a large, violent tornado. It was a classic looking “stovepipe” tornado, meaning it was very straight, up and down. The clarity of the funnel was amazing. It was in the middle of a field. Moments later, it leveled a hog farm. The roof was peeled away and debris was flying everywhere. It was an eerie feeling seeing this happen live, not knowing the status of the people that could have been in the building. A minute later, the tornado lifts. (It turns out, there were 6 employees that were in the barn, who ran into a brick office building and all were uninjured. Most of the pigs and piglets survived, too!)