Interactive: Who will be the 2012 GOP Presidential candidate?

Find out who's on the shortlist, what they bring to the table, and what critics say could hurt them. 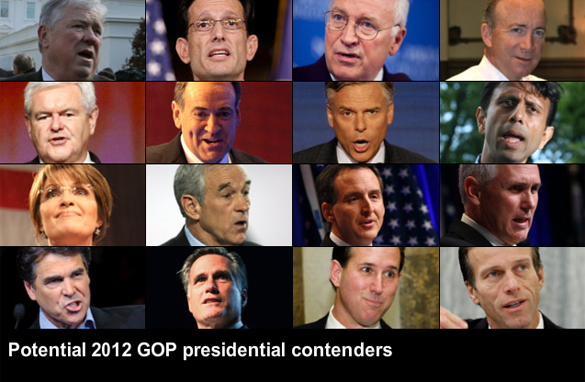 Over the next three days, conservative activists will fill out a ballot that asks: "Who would you vote for as the next Republican nominee for president?"

For Governor Tim Pawlenty, Friday had to be a surreal morning. At the same time he could have been headed to an Ohio rally be named John McCain’s running mate, he instead was at the Minnesota State Fair talking about pigs and carnies.

Pawlenty hosted his weekly radio show from a white porch on the fairgrounds in St. Paul, just as the nation was learning of McCain’s choice. The radio booth for WCCO sits under the skyride, behind the Icee booth in the middle of the midway.

Wearing a blue and white striped golf shirt, a smiling Pawlenty was greeted by cheers as he walked through the crowd. The man who was among the finalists to be McCain’s vice presidential nominee took the mic as Elvis’ Burning Love played. “Hunk-a –hunk-a burning love”, he said as the show began.

The show would feature a swine judge for the fair judging he said, telling the audience to laughter, “you should know about the quality of pigs.” His second guest in the fair-themed show would describe the life of a carnie.

Pawlenty says he likes the weekly show to be free of politics, but politics could not be ignored this morning. The first question from the audience was how he slept the night before, and what is next for Minnesota since he wouldn’t be leaving.
END_OF_DOCUMENT_TOKEN_TO_BE_REPLACED