Could a newly released audio recording be a key clue in the Michael Brown shooting?

A man who lives near the spot where Michael Brown lost his life has come forward with what he says is an audio recording of Officer Wilson firing his gun. CNN cannot independently confirm that this is an actual recording of the shooting, but if it is authentic it could be a key piece of evidence. Ted Rowlands has what can be heard on this recording.

What could the recording mean for prosecutors, if Officer Wilson is charged in the shooting of Michael Brown? Anderson discussed it with CNN legal analysts Jeffrey Toobin and Sunny Hostin, along with audio forensic expert Frank Piazza.

Who is Officer Darren Wilson?

Today's funeral for Michael Brown was all about remembering a life cut short. But now new details are emerging about the Darren Wilson, the police officer who fired the fatal shots. Ted Rowlands looks at Wilson's personal and professional life.

Anderson discussed the support Officer WIlson is receiving from the law enforcement community with Neil Bruntrager. He is the General Counsel for the St. Louis Police Officers Association.

The clean–up is just getting started in the San Bernadino Mountains. Witnesses say a flash flood there came so fast that they had little time to react. The mudslide killed one person, damaged more than 40 homes, and left dozens of cars covered in mud. Ted Rowlands has the latest.

Wildfires spread rapidly in Southern California are forcing thousands of residents to evacuate. Scorching temperatures, dry conditions and Santa Ana winds are fueling the flames. Some 10,000 acres has burned in San Diego County, including the nearly uncontrollable fire in San Marcos.

One family whose home was destroyed spoke to Anderson about the miraculous survival of their dog Rocky.

Watch Ted Rowlands’ report from inside an air tanker and see how they battle wildfires from above.

Police announce arrests and charges in connection with the death of Chicago 15-year old Hadiya Pendleton.
CNN's Ted Rowlands reports on the arrests and the teen's family reacts to the news.

Hadiya's parents will attend the State of the Union as guests of first lady Michelle Obama. 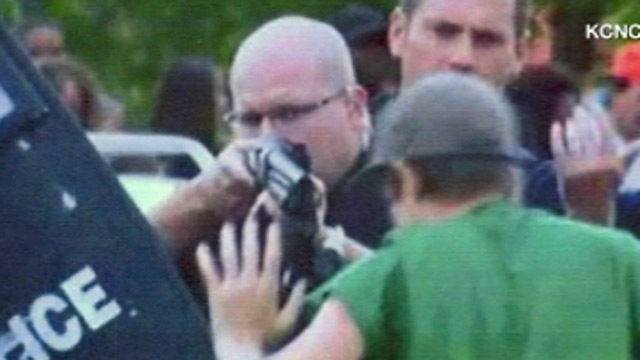 END_OF_DOCUMENT_TOKEN_TO_BE_REPLACED

Monday on AC360: Anderson Cooper in Wisconsin to report on shooting at Sikh temple

Editor's note: Anderson Cooper will broadcast from Wisconsin on Monday with the latest on the mass shooting at a Sikh temple. Watch at 8 and 10 p.m. ET.

Women and children were busy inside the Sikh temple in suburban Milwaukee, preparing for their traditional Sunday feast. Religious leaders gathered in the building's holy room, ahead of the hundreds set to arrive soon for the next service's 11:30 a.m. start.

This peace was shattered, when what authorities believe was a lone gunman opened fire inside and outside the temple in Oak Creek, Wisconsin. By the time a police officer - after his colleague had been "ambushed" and shot multiple times - returned fire, the gunman and six others were dead, Oak Creek police Chief John Edwards said.