Anderson Cooper recounts how the deadly shooting spree in a Wisconsin gurdwara unfolded. 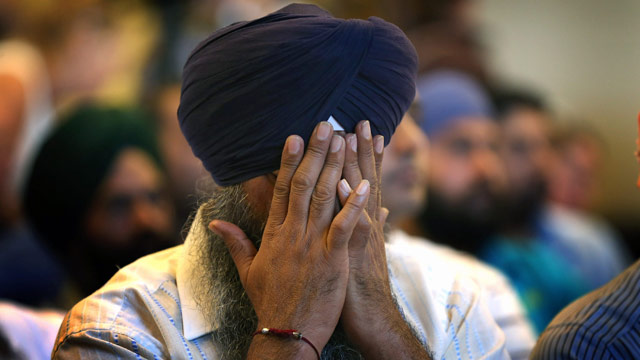 Tonight on AC360: Tragedy in the Sikh community

Here we are in Oak Creek, Wisconsin just about a week after covering the horrific shooting spree in Aurora, Colorado. I didn't think I'd be back on a story like this for a while...but sadly, I am. Different state. Different suspect. Similar tragedy and terrible loss.

It's good to see this getting a lot of attention. When we arrived at the police station this morning for the news briefing, it was jammed with media.

As I walked in, a large group – all members of the local Sikh community – was praying together in the lobby of the police department. It was a powerful sight. They were soon ushered to their front row seats for the news conference. They even asked questions of the FBI and police, including when they might get their temple back. They were told hopefully by Thursday while the investigation continues.

We waited about an hour or so to get an interview with Police Chief John Edwards. He has so much to deal with but is staying strong. He told me he hopes to make it to the hospital tonight to visit the officer who was shot eight or nine times. They are all so relieved Lt. Brian Murphy survived.

END_OF_DOCUMENT_TOKEN_TO_BE_REPLACED

Monday on AC360: Anderson Cooper in Wisconsin to report on shooting at Sikh temple

Editor's note: Anderson Cooper will broadcast from Wisconsin on Monday with the latest on the mass shooting at a Sikh temple. Watch at 8 and 10 p.m. ET.

Women and children were busy inside the Sikh temple in suburban Milwaukee, preparing for their traditional Sunday feast. Religious leaders gathered in the building's holy room, ahead of the hundreds set to arrive soon for the next service's 11:30 a.m. start.

This peace was shattered, when what authorities believe was a lone gunman opened fire inside and outside the temple in Oak Creek, Wisconsin. By the time a police officer - after his colleague had been "ambushed" and shot multiple times - returned fire, the gunman and six others were dead, Oak Creek police Chief John Edwards said.