Video: Sherrod say no thanks to job offer

Sherrod insists White House was behind her ouster

(CNN) – Former USDA employee Shirley Sherrod insists that the White House was behind the rush decision in July to ask her to resign after a conservative web publisher released an edited video clip that seemed to show her recounting racist behavior on her part. But she left open the possibility that the request for her resignation might not have come from “others working for the president” rather than directly from President Obama.

After a meeting with Sherrod Tuesday morning, Agriculture Secretary Tom Vilsack repeated his previous assertions that he did not speak with anyone at the White House before deciding to force Sherrod to step down.

"This was my responsibility," he said. "I disappointed the president (and) the country. ... I have to live with that."

But, in an interview set to air Tuesday on Anderson Cooper 360° Sherrod said “I stand by that” when asked about her past assertions that the White House had been involved in the loss of her job.

Watch more of the interview Tuesday night on Anderson Cooper 360°.

Washington (CNN) - Shirley Sherrod, who received an apology after being forced to resign from the Agriculture Department, declined an offer Tuesday to serve as the agency's deputy director of the Office of Advocacy and Outreach.

It was the first face-to-face meeting between the two since a controversial sequence of events last month culminated in Sherrod's stepping down.

"Many are to blame" for the reaction that followed, he said, "including my own administration."

Her whole story, Obama said he told Sherrod, "is exactly the kind of story we need to hear in America (because) we all have our biases."

The president made his remarks during an appearance at the National Urban League's 100th Anniversary Convention in Washington.

Shirley Sherrod told a panel at the National Association of Black Journalists convention Thursday she would pursue a lawsuit against blogger Andrew Breitbart.

"I will definitely do it," she said, when asked about rumors she was considering legal actions.

The Sherrod controversy began after conservative blogger Breitbart posted a portion of the speech in which Sherrod spoke of not offering her full help to a white farmer. The original post indicated that the incident Sherrod mentioned occurred when she worked for the Agriculture Department, and news outlets quickly picked up on the story.

Video: Anderson: Should be about the truth

Rush Limbaugh said Thursday on his radio show that Fox News and at least one of its anchors "caved" in its coverage of Shirley Sherrod, the former USDA employee who was fired in haste on Monday after an edited clip of her was posted on a conservative website.

"I have to go after it … because even Fox caved on this," Limbaugh said. "Even Shep Smith. Even poor old Shep Smith went down there and said that everybody's wrong on this, that [BigGovernment.com founder Andrew] Breitbart is wrong and so forth. There's only a handful of us that have the guts to put this story straight. If we don't hammer back nobody will."

Limbaugh dismissed the story, saying he was bored by it.

Watch Shirley Sherrod's full NAACP speech that ignited the controversy and decide for yourself whether it was warranted. 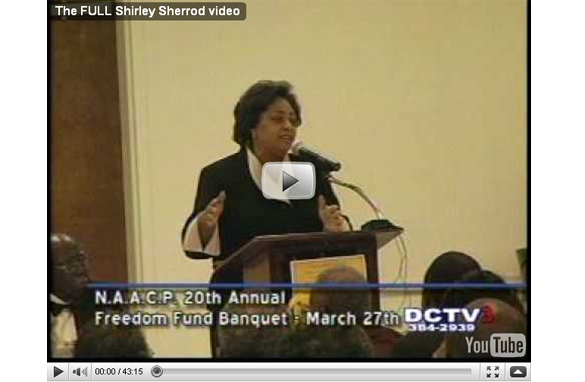