CNN's political analysts discuss Sarah Palin's hint in a Super Tuesday interview that she might accept a proposal to run for president.

Ari Fleischer, Dayna Lash, and Ron Carey talk to Anderson Cooper about the state of the GOP race, and the non-candidates everyone is watching.

Editor's note: Drew Griffin provides an early look at the thousands of Palin e-mails released Friday by the State of Alaska.

"FYI - I've asked Frank Bailey to help me track down soem [sic] evidence of past administration's dealing with Bill Allen," Palin wrote on May 8, 2007, a day after Allen pleaded guilty to bribery, extortion and conspiracy.

The document is one of the roughly 24,000 pages of records from Palin's administration released by Alaska state officials on Friday.

Editor's note: Sarah Palin is standing by her statement about a key moment in American history. CNN's Anderson Cooper reports. 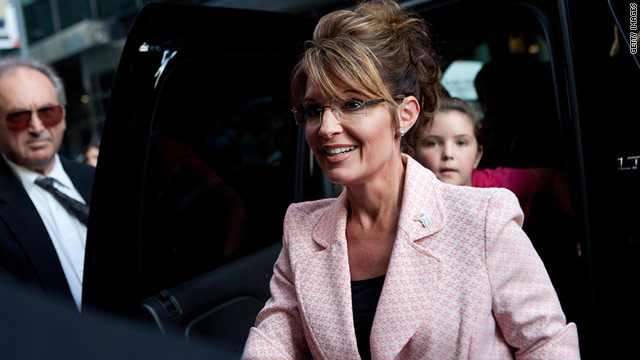 Portsmouth, New Hampshire (CNN) - In the end, Sarah Palin made nice with what she likes to call the "lame-stream" media.

Reporters were kept in the dark about Palin's whereabouts during her "One Nation" bus tour and were forced to depend on sources or tips from park rangers to figure out which historical site the former Alaska governor might appear at next.

Her strategy is unlikely to change as the patriotism-themed tour makes its way through the Midwest, West and South later this month.

But once reporters tracked her down, Palin was eager to engage. At stop after stop after stop, she answered questions on everything from energy subsidies to the debt ceiling to her favorite brand of designer jeans.

At times, it seemed like Palin was going rogue all over again.

Though still under an exclusive contract with Fox News Channel, Palin was raring to mix it up with a political press corps that, in her eyes, has underestimated her ever since she was thrust into the national spotlight as John McCain's running mate in 2008.

Palin's refusal to inform the media of her itinerary grabbed headlines, but the storyline overshadowed the fact that the brigade of reporters chasing Palin were usually able to get a heads up on her next move and arrive prepared at the next stop.

Editor's note: Ari Fleischer and CNN's Candy Crowley weigh in on the political futures of Mitt Romney and Sarah Palin.