The audacity of hype

So, now we know. President Obama's mentions of Rush Limbaugh are no accident. Democratic strategists have discovered that Rush has low approval ratings with the general public. So they have devised a strategy to paint Republicans with the Rush brush in order to marginalize conservatism and the Republican Party. In the nineties, they demonized Newt. Now, they're after Rush. And the media is happily going along, as it so often does.

Back in December, while the Republican Party had not one, but two, highly qualified and widely respected African-Americans running for its chairmanship, the media chose instead to focus on the juvenile antics of Chip Saltsman and his Christmas CD. Show after show featured outraged democratic strategists attacking the Republican Party because of one man's lapse of judgment. And conservative after conservative was called on to defend or attack the hapless politician. When Republicans then elected former lieutenant governor Michael Steele to lead the party, it was treated as a non-event. Michael Steele's election as the first African-American RNC chairman received a fraction of the airtime that was devoted to the CD circus, and none of the reverence that has greeted Pres. Barack Obama at every turn of his political career. The media slid right by without a reflective pause, let alone gushing profiles and heroic magazine covers.

END_OF_DOCUMENT_TOKEN_TO_BE_REPLACED 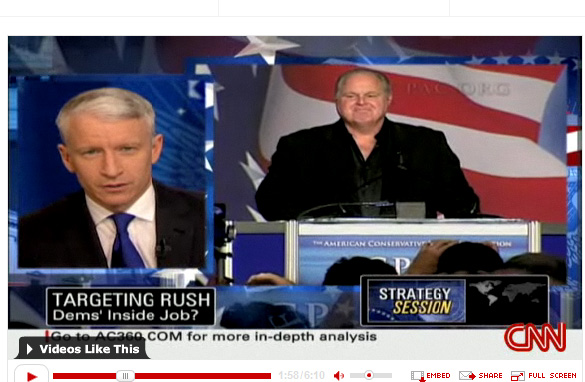 Anderson talks with his panel about a politico.com report that says Democrats are targeting Rush Limbaugh.

The 2008 election sent many messages. At the top: Americans wanted to turn the page on the politics of division and partisan pettiness, and they wanted a government - and country - that would put the middle class first.

Watching the Republicans operate this past month, it would appear that they missed that unmistakable signal.

Instead, Rush Limbaugh has become their leader.

Limbaugh, of course, told his radio listeners that he's rooting for President Obama to fail - and hoping the president's ideas for bolstering our economy fail with him. For many Americans, hungry for leadership and cooperation, this sounded like fingernails on a chalkboard. When Limbaugh reiterated the sentiment this weekend, hundreds of Republican conservatives cheered him on. But instead of rebuking the radio personality or charting their own course, Republican leaders in Washington are paralyzed with fear of crossing their leader. Less than 24 hours after committing the unforgivable sin of criticizing Limbaugh, RNC Chairman Michael Steele felt compelled to publicly apologize. He was not the first and will certainly not be the last.