Illinois Sen. Roland Burris reiterated Monday that his sworn testimony regarding his contacts with then-Gov. Rod Blagojevich was not inconsistent with what he later said in an affidavit.

The Democratic senator's comments come a day after Illinois Republican leaders called for a perjury investigation into whether Burris deceived the public last month when he failed to tell state lawmakers that Blagojevich's brother solicited him for campaign cash at the same time that the governor himself was considering whether to appoint him to fill the Senate seat vacated by President Obama.

"We said in our testimony before the impeachment committee, my lawyer stated, that we will have to file additional information in our report because there were some questions asked where we had to get sufficient information for the committee," Burris said outside Fellowship Missionary Baptist Church on Chicago's South Side before a five-day statewide "listening tour" of his new constituents.

"We also stated that we might be incomplete in our report," he said.

Roland Burris, Illinois' newest senator, likes to talk about his years of service to the people of the state and his steadfast refusal to engage in the politics of favors.

He rarely discusses one milestone in his long public career: a record $800,000 campaign loan he received in his 2002 run for governor. Nor is he quick to mention the man who made the loan, businessman Joseph Stroud, who provided most of Burris' financial support for that failed bid, $1.57 million in all.

Did Roland Burris secure his appointment to Barack Obama's vacant Senate seat through some kind of pay-to-play politics of the very sort that have tainted the man who appointed him, Illinois Gov. Rod Blagojevich?

Republicans in the Illinois state legislature are asking that question, and they want Burris, the former Illinois attorney general, to answer in person at a hearing scheduled for Thursday on Blagojevich's impeachment.

And the question is reverberating back to Washington, where Democratic leaders have been blocking Burris from taking the Senate seat, saying the appointment is tainted by Blagojevich, who was arrested last month and accused of trying to sell the seat for money and influence.

Blagojevich, however, has not been indicted and remains governor. He and Burris say the appointment is legal. In a written affidavit given to the impeachment panel, Burris said he had one limited conversation with the governor about the Senate seat before he was appointed. And that conversation, he said, was initiated by a Blagojevich attorney.

But records show the two men have long ties to each other - includinglucrative state contracts, political contributions and even a job for the governor's wife. Those records are raising thorny questions from state officials, particularly Republicans.

"I want Mr. Burris to, under oath, talk about that, about exactly when his interest in his seat, when he became interested in the seat," said Republican State Rep. Jim Durkin, "how far back it went, who did he talk to, and exactly the communication that went back and forth between him and the governor and any type of documentation which he may have given to the governor."

END_OF_DOCUMENT_TOKEN_TO_BE_REPLACED

Program note: Tune in to 360° tonight for more on the drama surrounding Blagojevich’s Senate appointment.

WASHINGTON (CNN) Senate Democrats have no choice but to change their tone because Illinois Gov. Rod Blagojevich “called our bluff” in appointing someone over their objections, a senior Democratic congressional source conceded Wednesday.

“We tried to send a political signal to Blagojevich that we would not seat someone he appointed. He called our bluff, in a reckless way,” said the Democratic source.

A second senior Democratic source said it had clearly become a “heightened situation” that needed to be dealt with and that Burris’ face to face meeting with Senate Majority Leader Harry Reid and Majority Whip Dick Durbin really helped to establish a “person to person dialogue.”

A third senior Democratic source simply demurred that Democrats changed their tone after they “looked more into the situation.”

It is also noteworthy that Reid and Durbin went out of their way, unsolicited, to note this matter was not about race, noting that Burris himself had told them that

END_OF_DOCUMENT_TOKEN_TO_BE_REPLACED

I'm a United States Senator. And here's the proof?

Here is the certificate  from Gov. Rod Blagojevich appointing Roland Burris to the U.S. Senate.  The appointment was rejected on Monday because of the missing signature from Secretary of State Jesse White.  The Senate requires this signature, but White is opposing the appointment. 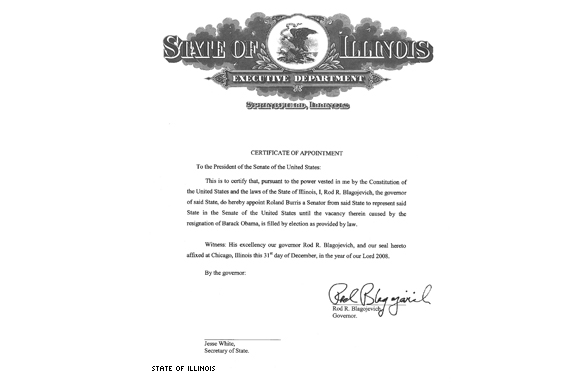