Moving beyond expectations - The myth of young voter apathy

[cnn-photo-caption image=http://i2.cdn.turner.com/cnn/2008/images/10/29/art.youth.onecampaign.jpg
caption="Charlie Harris, a Western Kentucky University student, talks to Courtney Yates as the One.Org bus makes a stop at Western Kentucky University as part of its cross-country trip encouraging students and others to vote."]Rob Grabow
Author, “Voting with Our Pants Down”

With the election only six days away and 44 million 18- to 29-year-olds comprising a critical voting bloc with tremendous electoral power, many people still perceive – misperceive – that young voters are apathetic, self-absorbed hedonists who can't be counted on to vote. Recently I had an amiable but illuminating conversation with a Philadelphia Daily News writer, who echoed some of these charges. He said, "I'll believe there's a youth vote when I see it." Such sentiment is hardly a novelty. In 2004, famed author Tom Wolfe suggested in one national interview that only 6-9 percent of college students were truly politically or civically engaged. His charge went largely unchallenged.

In a way, that silence says more than Wolfe's words, since it indicates the media's role in reinforcing the misperception. Relative to the size of our voting constituency, we're disproportionately underrepresented in the national debate. It's wrong just to say we lack experience, ambition, or work ethic, as is sometimes claimed. More critically, because of the same unchallenged impression in the media, we often lack opportunity and access.

I believe that what's most disheartening is that when we are talked about, when questions of demographic identity arise, who comes on to answer them. For the most part it isn't us. Young voters are not included in the conversation; instead we are generally talked to, talked about, and told who we are.

END_OF_DOCUMENT_TOKEN_TO_BE_REPLACED

The Unseen Avalanche: Young voters in 2008 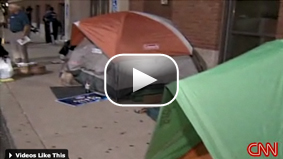 Some Cincinnati, Ohio voters camp out overnight in order to be one of the first to cast their ballot early.

Rob Grabow
Author, "Voting with Our Pants Down"

Young voters, 44 million strong, are the country's second largest voting bloc this year. There are more of us than there are citizens of Spain, or residents in 40 Montanas. To provide a visual, if you were to lay us out flat lengthwise, we would circumnavigate the globe twice. The relevance of these numerical values and images bears on the fact we are going to turn out in record numbers this year.

But because we have a limited voice in the national political debate, the claim that we will cast ballots in droves may seem naive. What makes this election year different than others in past?

For starters, nearly 80 percent of young voters are registered to vote. And some 74 percent seriously plan on turning out this election. Those results are based on a self poll and should be understood in that context. Nevertheless, at minimum, these polls are a bellwether, indicative of a significant unseen catalyst.

True, registration doesn't guarantee turnout. However, a voter who makes it to the polls once is much more likely to visit again. And three times more young voters caucused in Iowa in 2008 during the Democratic primary than in 2004. Young voter turnout in New Hampshire was 271 percent higher than the previous presidential primary. On Super Tuesday, almost three-million young voters made it to the polls, significantly more than any Tuesday past. This baseline is also building on the bar established in 2004, a year that saw a near-record level of young voter participation, almost 50 percent. All of these trends should make your spine tingle, toes curl, and hair stand on end, because it means we're coming out.