The battle over the shutdown has opened some very public disputes within the Republican party. It is the sort of infighting that generally only happens behind closed doors. The panel takes a look at what this says about the party as it heads into the next election.
Click to watch video
October 17th, 2013
11:27 PM ET

Is the Republican brand damaged?

That question will ultimately be answered by the American people in the next election. Chief National Correspondent John King takes a look at why the saying "all politics is local" may be especially true in the midterms.

Sparks fly when Margaret Hoover, Gayle Trotter and Charles Blow discuss the GOP's future and how to broaden its appeal after a study commissioned by the Republican National Committee prescribed a major makeover for the party.

The report stated, "Unless changes are made, it will be increasingly difficult for Republicans to win another presidential election in the near future." And a new CNN/ORC poll reveals 38 percent view the GOP in a favorable light while 54 percent of voters surveyed have an unfavorable view of the Republican Party. Reince Priebus, RNC chairman, plans to spend $10 million to reshape their message.

Hoover supports Priebus' initiative and "preaching tolerance" on issues like gay marriage and immigration reform. "There has got to be room for people that have different views on different issues, which means we're getting rid of this necessity to have absolute orthodoxy on every issue," she says.

END_OF_DOCUMENT_TOKEN_TO_BE_REPLACED

Borger: 'Now it's about survival'

What's next for the party that tried and failed to retake the Senate and White House? Former New York Mayor Rudy Giuliani talks to Anderson Cooper about the Republican platform and his party's dwindling support among Hispanics.

"I think there's one big issue...we've got to get over this immigration reform hurdle. President Bush was on the right track with comprehensive immigration reform. If we had passed that, we would be a party that probably had a 40 – 45% Hispanic base," says Giuliani. "Big opportunity lost really in Mitt Romney losing because I think that's one of the things Mitt Romney could have accomplished."

END_OF_DOCUMENT_TOKEN_TO_BE_REPLACED

Republican Sen. Lindsey Graham says his party has a "demographic problem," and it comes down to immigration reform. 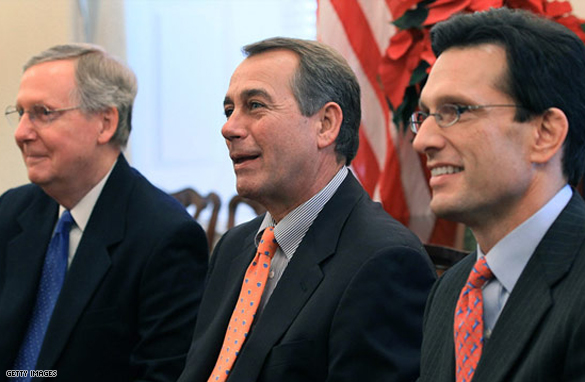 In the months leading up to the midterms, President Barack Obama and Democrats tried to label Republicans the "party of no."

But in the weeks since the election, Republicans have come out of the gate swinging, prompting the president to peg them as the "hostage takers."

And with liberal Democrats in the House revolting over the deal Obama worked out with Republican leaders to extend tax cuts to all Americans rather than just those making $250,000 or less - a key campaign promise - the president is in a tight spot. He'll face a larger class of Republicans coming in with the new Congress next month and Democrats remaining defiant despite their weakened standing.

All 42 Senate Republicans last week issued an ultimatum, refusing to move ahead with any other issues being considered by the lame-duck Congress until the dispute over extending the tax cuts, which are scheduled to expire at the end of the year, was resolved and an extension of current government funding was approved.

It was a bold move by Republicans, who won control of the House of Representatives in last month's midterms and weakened Democrats' power in the Senate. Supporters said Republicans were standing up for their principles, while Democrats likened it to a congressional temper tantrum.

"Mitch McConnell and the Republican senators that signed that letter last week said basically, 'You are going to play by our rules or we're going to take our ball and go home,' " said Democratic consultant Mo Elleithee.

So far, the White House has been forced to play by GOP rules.

With Congress at a stalemate, Obama this week announced a deal worked out with Republican leaders that recommended extending the tax cuts for all income levels for two more years.