Editor's note: Anderson Cooper reports on what the U.S. is learning in the wake of the bin Laden raid.

Got milk? Got hormones? Got a problem with that? 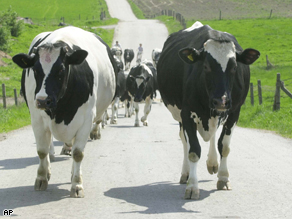 Milk is back in the news, thanks to Wal-Mart. The giant retailer recently announced that milk sold under its store brand will now come exclusively from cows free of artificial growth hormones, which some farmers use to boost milk production. Wal-Mart says its new policy was driven by customer demand. (Kroger, Safeway, Publix and Starbucks have already made the same switch.) So what’s driving demand? Possibly, articles like this one, which made the rounds here at CNN. The person who spotted the piece described it as a great story “on how hormones in milk are causing girls to reach puberty years ahead of time.”

When I checked it out, however, I found just one problem: so far, that conclusion isn’t supported by decades of scientific studies. Researchers have not been able to definitively link hormones in milk and harm to humans, including early puberty in young girls. The writer of the article actually points that out. But she also writes: “there’s tons of speculation. Common sense should tell you that excess exposure to artificial hormones cannot be good for you.” She then advises readers to avoid milk with added hormones, even if it costs more. When I called her, she elaborated: “I just know a lot of times when you’re using something like a medication or an additive, years down the road you find that it’s associated with something terrible.” She also told me she has a pre-teen daughter and would rather be safe than sorry.
END_OF_DOCUMENT_TOKEN_TO_BE_REPLACED