New warning for Americans heading to the Olympics

Defense Secretary Chuck Hagel is talking about America's plan if terrorists make good on threats to attack the Sochi Winter Games. Already we've seen bombings, threats of more bombings, the manhunt for possible female black widow bombers, and a flood of security forces into the troubled region where the games will take place. Nick Paton-Walsh has the latest.

Attacks in Russia ahead of Olympic Games

A pair of deadly bomb attacks in the Russian city of Volgograd killed at least 31 people, injured dozens more and sent a violent message just six weeks before the start of the Winter Olympics in Sochi. So far there are no claims of responsibility for the attacks. There are serious questions about whether this is the work of a known Chechen separatist group that vowed to unleash maximum force to disrupt the Sochi Games. Diana Magnay has the latest from Moscow.

What does this mean for security at the Sochi Games? Anderson discussed all of this with former CIA officer Robert Baer and National Security Analyst Fran Townsend.

The impact of Putin's anti-gay laws

As Putin uses his op-ed in the New York Times to send a message to America, the world is considering sending him an even stronger message. Russia's recent anti-gay law has some considering a boycott of the upcoming Winter Olympics in Sochi. Masha Gessen is an openly gay journalist forced to leave Russia with her family because of that law. She makes the case for the boycott.

The Olympics and interfaith work 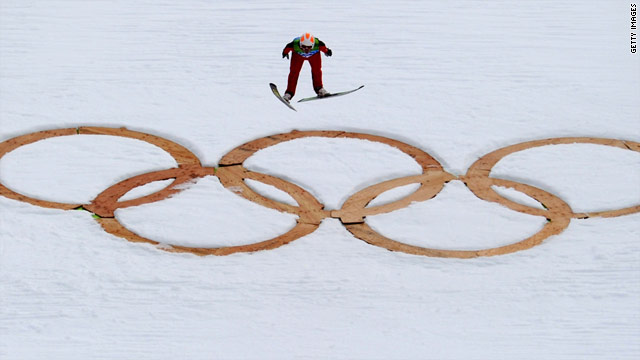 I've been watching the Olympics with great interest the past couple of weeks. I love seeing athletes from all over the world wrapped in the flags of their countries and the songs of their nations – proud of the particularly of where they come from.

And as I watched last night, I got to thinking that these people are engaging in something profoundly common – excellence at athletics.
At the bottom of the ski run, they high five. On the podium, they hug even while their different flags are raised.

It reminds me that the Qur'an teaches us to vie with one another in doing good works.

It would have been one of the most memorable moments in the history of the Olympic Games.

It wasn't to be - it's probably unrealistic to think that it could have happened.

But what a message it would have sent.

Think what the response of the world would have been if, in the wake of that repugnant official statement blaming 21-year-old luge athlete Nodar Kumaritashvili for his own death during a practice run, all of the more than 2,500 athletes from 82 countries at the Winter Games had stood together and announced, in polite and respectful tones:

We will not compete in these Olympics until the organizing committee issues a public apology for what they have done to the memory of our fellow athlete.

Why the Olympics matter

Robert A. Kaufman
Special to CNN

Ninety-seven nations will march in Vancouver tonight at the Opening Ceremony of the XXI Winter Olympic Games. Turn on your TV. Watch and cheer.

Cheer for the sportsmanship and spirit shown at this highest level of competition among the world's nations.

A fine example of this sportsmanship happened four years ago, when a ski pole, a race in Italy and maple syrup came together. It started when Norwegian cross-country ski coach Bjørnar Håkensmoen performed an extraordinary act.

On February 14, 2006, Canadian cross-country skier Sara Renner began the women's team sprint competition in Turin with something to prove. After having placed no higher than eighth in four events at the Salt Lake City Games in 2002, Renner was determined to improve her performance in Turin. But in the middle of the final heat, something terrible happened. One of her ski poles broke.

The politics of spite

There was what President Obama likes to call a teachable moment last week, when the International Olympic Committee rejected Chicago’s bid to be host of the 2016 Summer Games.

“Cheers erupted” at the headquarters of the conservative Weekly Standard, according to a blog post by a member of the magazine’s staff, with the headline “Obama loses! Obama loses!” Rush Limbaugh declared himself “gleeful.” “World Rejects Obama,” gloated the Drudge Report. And so on.

So what did we learn from this moment? For one thing, we learned that the modern conservative movement, which dominates the modern Republican Party, has the emotional maturity of a bratty 13-year-old.

When his stint in the White House is over, President Obama might just learn that Thomas Wolfe was right. You can't go home again.

Back in Obama's adopted hometown of Chicago, Illinois, some members of the black community are incensed at the president for not personally speaking out about the murder of Derrion Albert, a 16-year-old boy who was beaten to death last week in a predominantly African-American neighborhood.

What really set them off was that Obama, in an awkward case of bad timing, instead flew to Copenhagen to pitch Chicago to the International Olympics Committee as the ideal city to host the games in 2016.