The lessons of Exxon Valdez

In the wake of the gulf oil disaster, there has been much discussion about lessons that weren’t learned from Alaska’s 1989 Exxon Valdez spill.  Click here to read the final report from the Alaska Oil Spill Commission and tune in to AC360 tonight at 10pmET to hear from environmental law Professor Zygmunt Plater, who chaired the commission’s legal research task force.

Interactive: Tracking the oil's impact on you

The oil disaster in the Gulf of Mexico has wide environmental and economic consequences. Click the points on the map to see the impact on the area. 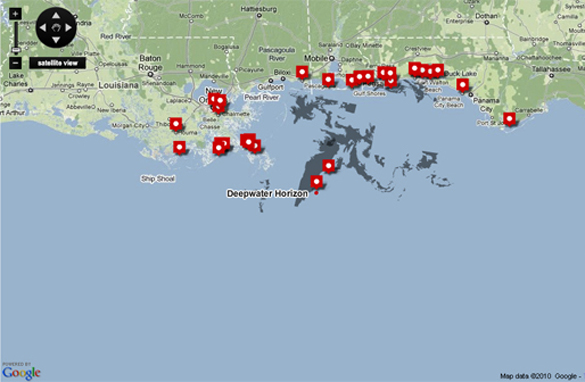 Photos of oil coming ashore in Biloxi, Mississippi taken by CNN iReporter mrshmills. At the brink of finally recovering from the devastating effects of Hurricane Katrina, residents are distraught as little was done to prevent oil from floating onto their shores, even with 70 days of knowing it would be headed their way. 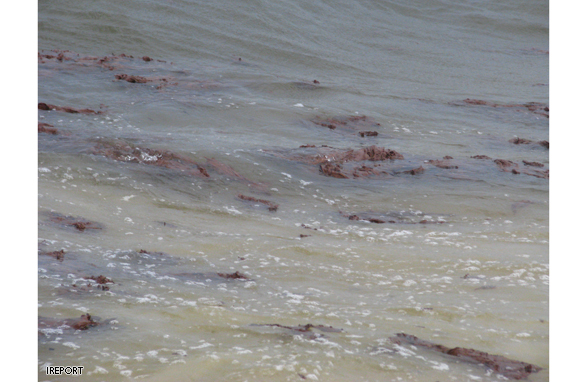 END_OF_DOCUMENT_TOKEN_TO_BE_REPLACED

The Governor, Alex and oil

The rain in Grand Isle, Louisiana won't quit. But nobody cares about staying dry here today. They care about the oil and where it's moving. I just boarded a boat with Governor Bobby Jindal to go see what Hurricane Alex brought ashore. Our tour should take us over to Grand Terre and Barataria Bay. Those areas were hit really badly by the spill. Oily pelicans and turtles were pulled from there for days. The governor wants to see how much more damage the hurricane may have caused there. He's not sure what to expect. Neither are we.

Our first stop is Pass Abel. One of many that lead into Barataria Bay. The governor shows us where he wanted to put huge rocks to help keep the oil out. He says he asked the President for help with this a month ago and has heard nothing back. Governor Jindal told me if the federal government isn't going to help then they "need to get out of the way".

As we make our way to Barataria Bay we run across an oily sheen on the water about a mile wide. Right nearby dolphins swimming. It's a surreal sight. You only hope they keep a safe distance.

After we passed the dolphins we arrive at Grande Terre Island. The Governor sees just what he feared most. The oil has moved deeper into the barrier island marsh threatening the shrimp and redfish. This is their nursing ground. Over 90 percent of the species in entire gulf area rely on this unique estuary. The U.S. Fish and Wildlife Service calls this the most productive estuary in North America. It's a combination of fresh water from Mississippi and salt from the gulf. Easy to see why folks here are fighting to protect it. 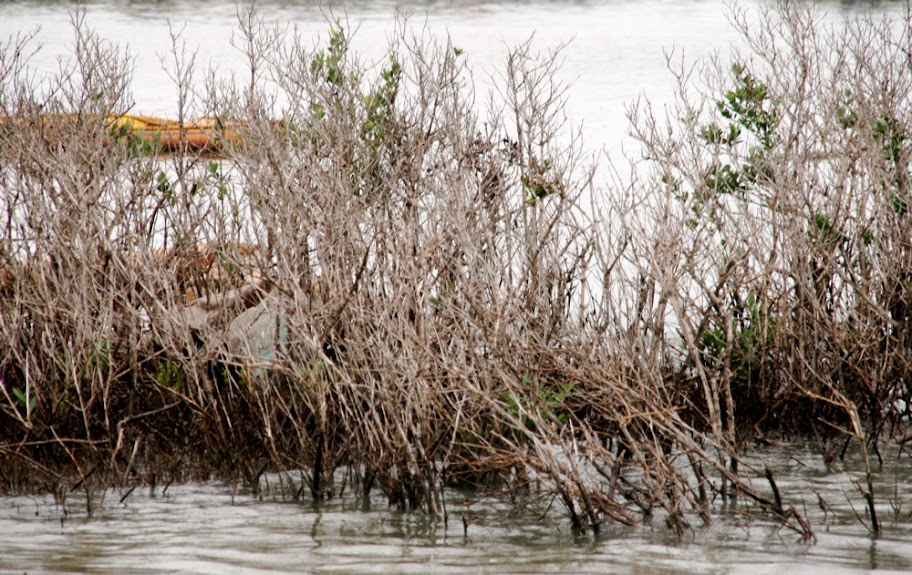 Louisiana Department of Wildlife and Fisheries Enforcement pointed out mangroves that oil had killed after 4 weeks of exposure, saying "they're dead and they ain't coming back." 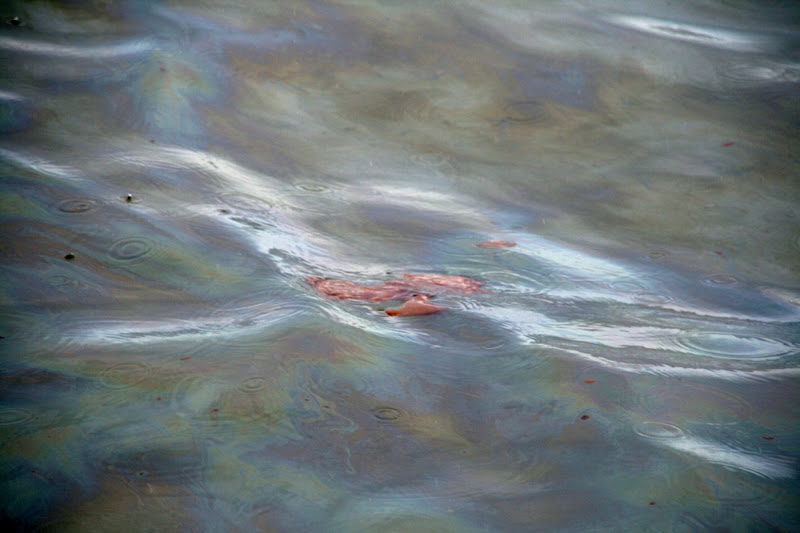 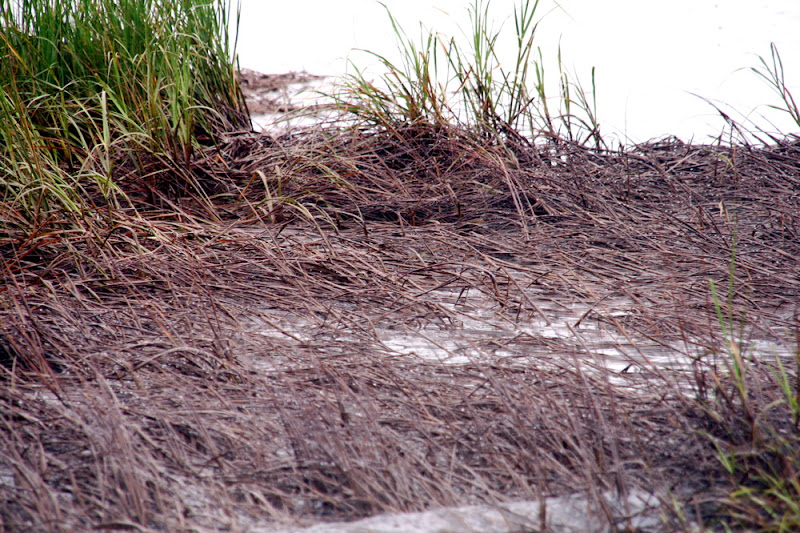 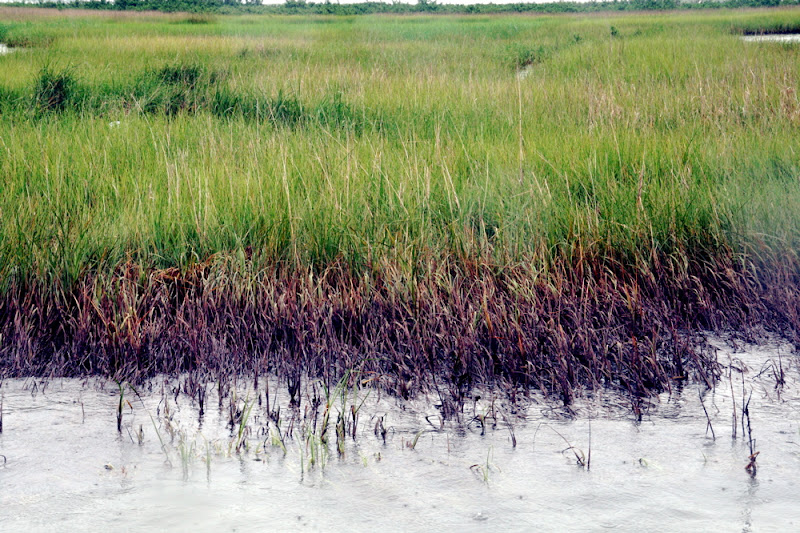 Video: Alex and the oil disaster

Nigeria's Niger Delta is one of the most oil-polluted places on the planet with more than 6,800 recorded oil spills, accounting for anywhere from 9 million to 13 million barrels of oil spilled, according to activist groups.

But occurring over the 50 years since oil production began in the Delta, this environmental disaster has never received the attention that is now being paid to the oil-spill catastrophe hitting the U.S. Gulf coast.

"The whole world is trembling and even the president of America had to do a personal visit to the site. The U.S. will have put serious measures in place to stop such situations happening in the future," said Ken Tebe - a local environmental activist who is visibly shaken by what he regards as a double standard.

"It's funny because we've been dealing with this problem for 50 years. I even heard BP will pay $20 billion in damages (for the U.S. spill). When will such hope come to the Niger Delta?" Tebe asked.

The Louisiana native who was the commander of task force Katrina has some very definitive ideas about what should be done with this oil disaster. Lieutenant General Russel Honoré says World War III needs to be declared in an effort to win this battle of the oil. He also likens BP to a "mugger" and then "having the burglar determine what the compensation is."

The Gulf of Mexico needs to be saturated with military power says the retired General. And it needs to start now. We'll have our candid conversation with Russel Honoré tonight on AC 360.