Teams of investigators were out at daybreak Wednesday examining damage to NASA's Wallops Flight Facility after an unmanned rocket exploded shortly after launch on the Virginia coast, NASA spokeswoman Rachel Kraft told CNN via email. The crash caused a huge fire and scattered debris over a large area. Gary Tuchman reports on how it all unfolded.

A photo with some spark

Check out this photograph we couldn't help but post. 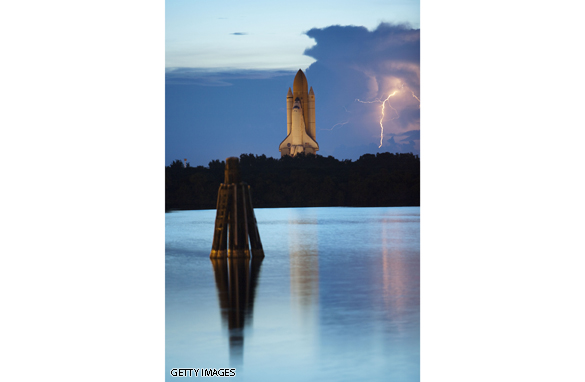 Space Shuttle Discovery rolls out to launch pad 39-A at the Kennedy Space Center in Cape Canaveral, Florida, August 4, 2009. It is scheduled to launch to the International Space Station no earlier than August 25th. (Photo by Matt Stroshane/Getty Images.)

Video: 'No event was more important'

A giant leap from Ohio

[cnn-photo-caption image=http://i2.cdn.turner.com/cnn/2009/TECH/space/07/17/moon.landing.hoax/art.aldrin.nasa.jpg caption="Greene writes that for most, it's pretty certain that 'we're never going to go to the moon.'"]
Bob Greene
CNN Contributor

All over the world this weekend, people are peering up into the night, trying to catch a glimpse of a sliver of the moon.

They're thinking about the moon because of Monday's 40-year anniversary of mankind's first lunar landing. And more than a few people are undoubtedly allowing themselves to dream of traveling to the moon themselves.

It's not going to happen. For almost all of us, it can be said with certainty:

We're never going to go to the moon.

We can go to Wapakoneta.

Wapakoneta is a town of barely 9,000 people in northwestern Ohio. It may be, in its own quiet way, the most inspiring single place in the United States.

One small step for man, one giant leap for Twitter

Editor's Note: To commemorate the 40th anniversary of the launch of Apollo 11, the Smithsonian National Air and Space Museum has been tweeting the historic mission starting today as if it were happening in real time. To follow along with man's first trip to the moon, check out their twitter feed at twitter.com/reliveapollo11 or click the image below. 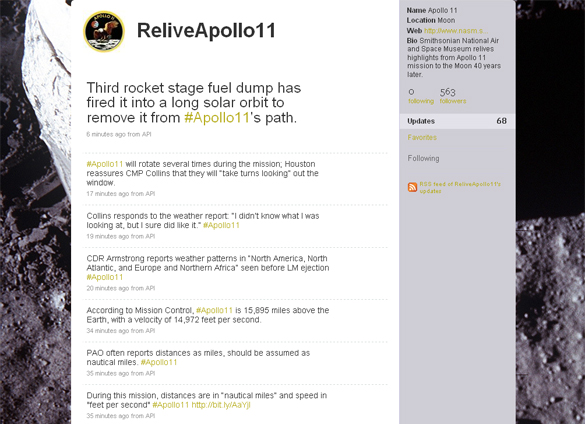 Four decades have passed since the summer of 1969, when Neil Armstrong, Mike Collins and I flew America's first lunar landing mission.

The passage of time has not faded either the memory of that summer or the importance of what we achieved, for our mission was about more than just exploring the moon.

On July 20, 1969, Neil and I were peering out the window of our lunar lander, the Eagle, as it descended toward the lunar surface. The ship's computer was steering us toward a field of boulders the size of cars.

That same computer - with less power than today's pocket calculators - was signaling that it was overworked and dangerously overloaded. Our single tank of fuel was nearly empty as we approached the surface, invisible to us, cloaked in a cloud of swirling dust.

Neil took manual control and flew us toward a smoother terrain. Then, as the shadow of our landing gear appeared etched onto the surface in the gloom, a light on our console flashed that contact had been made.

[cnn-photo-caption image=http://i2.cdn.turner.com/cnn/2009/images/03/11/art.hawking.front.jpg caption="Professor Stephen Hawking in Pasadena, CA. Hawking gave a lecture entitled, "Why We Should Go Into Space."]

I had the good fortune to attend a lecture by the famous and ground-breaking science professor Stephen Hawking last night in Pasadena called “Why We Should Go Into Space.” Speaking from his high-tech wheelchair, he delivered a convincing argument for why space exploration should continue even in toughest economic times – using everything from hard statistics on NASA’s flat budget - just 0.12% of the federal budget - to a vintage Calvin and Hobbes cartoon about intelligent life in the universe.

It was an engaging look at man's place in the cosmos and how much more there is to know about our universe. Yet as I grappled with black holes, interstellar exploration and the search for life in the universe, I kept drifting away back to events of the day, and the terrestrial pursuit of politics. Earlier on Monday, President Obama signed an executive order lifting the Bush administration’s restrictions on embryonic stem cell research.

END_OF_DOCUMENT_TOKEN_TO_BE_REPLACED

Rocketting through space – and time

A former colleague once lamented that – contrary to the expectations of our early 1960s childhood – space travel for the average American man and woman would not be realized in our lifetimes. Fewer than 500 humans have soared beyond Earth’s grasp; military test pilots, specially-trained astronauts and, more recently, a handful of wealthy people who have paid for passage aboard a Russian craft.

I thought of this tonight as I stood in my driveway and stared into the evening darkness. At 6.13 p.m., as forecasted, a bright light traveled from southwest to northeast, emerging above the trees across the street and passing overhead until its disappeared through trees behind the house. It had the look of a star and cruised at an altitude well beyond that of anairliner.

I craned my neck to follow the space shuttle Endeavour, gradually turning my body 180 degrees. I marveled at this rare sight with the kind of uninhibited emotion (“that’s really neat”) you give up passing from childhood into adolescence and then adulthood. Today, with satellites beaming live signals of the world to itself (including from the shuttle, thanks to the NASA channel), it is easy to lose the wonder of seeing something with your own eyes.

END_OF_DOCUMENT_TOKEN_TO_BE_REPLACED

NASA braces for '7 minutes of terror' on Mars

[cnn-photo-caption image=http://i.cdn.turner.com/cnn/2008/TECH/space/05/23/mars.lander/art.phoenix.lander.nasa.jpg caption= "An artist rendering of the landing of the Phoenix mars lander."]

After years of planning and nine months of space travel,
seven minutes is all it takes to make or break a Mars landing.

That's the amount of time it takes an orbiting spacecraft to hit the Martian atmosphere, brake, and hit the ground. Mission scientists call it "seven minutes of terror."