Frequent CNN guest and Middle East scholar Fouad Ajami has died at the age of 68. Anderson takes the time to remember what he said was "a man of tremendous grace, and kindness."

A man I greatly admired, Fouad Ajami has died. He was a great intellect and was full of grace and compassion. It's been an honor to know him

A campaign adviser said if Mitt Romney were president, the attack on the U.S. Consulate could have been prevented. And Paul Ryan said in a speech that the Obama administration is treating Israel "with indifference bordering on contempt." Anderson Cooper is Keeping Them Honest.

Editor's note: CNN's Miguel Marquez reports on the investigation of Nakoula Basseley Nakoula, the man the FBI believes is behind the anti-Islam film that has sparked outrage.

Some time in the summer, a small theater in Los Angeles screened a movie to which hardly anyone came.

It was a clunky film filled with scenes in a desert and in tents. The characters were cartoonish; the dialogue gauche.

The actors who'd responded to a July 2011 casting call thought they were making an adventure film set 2,000 years ago called "Desert Warrior." That's how Backstage magazine and other acting publications described it.

The American-made movie, it turns out, was hardly an innocent desert action flick.

Instead, the movie, backed by hardcore anti-Islam groups in the United States, is a tome on Islam as fraud. In trailers posted on YouTube in July, viewers saw this: scene after scene of the Prophet Mohammed portrayed as a womanizer, buffoon, ruthless killer and child molester.

Ajami: Film 'from right out of the gutter'

Fouad Ajami condemns an anti-Islam film as a cheap work of incitement and explains the clash between East/West values.

On Friday night AC360° will air a special report “Arab Spring: Revolution Interrupted.” In December 2010, a young Tunisian street vendor named Mohamed Mouazizi refused to pay a bribe to a local inspector who slapped him. This indignity led Bouazizi to set himself on fire in protest and Tunisians, already fed up with the unemployment, corruption and repressive conditions in the country took to the streets, quickly causing the resignation of Tunisia's president. These events sparked a wave of revolutions across the region in countries like Bahrain, Yemen, Egypt, Libya and Syria.

It's been written that a decade's worth of events have occurred in the Arab world in just over a year. Long time dictators like Hosni Mubarak and Moammar Gadhafi have fallen, while the regime of Bashar al-Assad still clings to power in Syria, despite 15 months of ongoing conflict.

END_OF_DOCUMENT_TOKEN_TO_BE_REPLACED

On Friday night AC360 will air a special report “Arab Spring: Revolution Interrupted.” In December 2010, a young Tunisian street vendor named Mohamed Mouazizi refused to pay a bribe to a local inspector who slapped him. This indignity led Bouazizi to set himself on fire in protest and Tunisians, already fed up with the unemployment, corruption and repressive conditions in the country took to the streets, quickly causing the resignation of Tunisia's president. These events sparked a wave of revolutions across the region in countries like Bahrain, Yemen, Egypt, Libya and Syria.

It's been written that a decade's worth of events have occurred in the Arab world in just over a year. Long time dictators like Hosni Mubarak and Moammar Gadhafi have fallen, while the regime of Bashar al-Assad still clings to power in Syria, despite 15 months of ongoing conflict.

END_OF_DOCUMENT_TOKEN_TO_BE_REPLACED

Editor's note: CNN's Fred Pleitgen on how protests in Egypt now are very different then those against Hosni Mubarak. 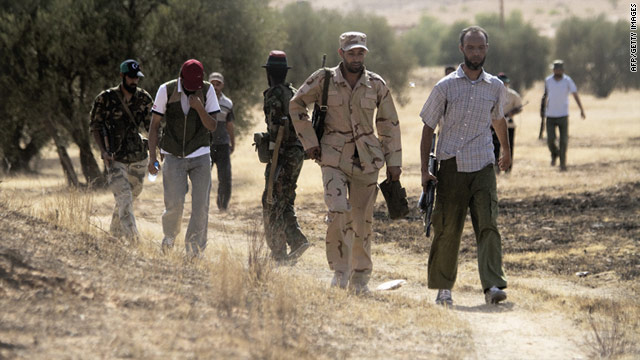 The New York-based Human Rights Watch said that, in "four towns captured by rebels in the Nafusa Mountains over the past month, rebel fighters and supporters have damaged property, burned some homes, looted from hospitals, homes, and shops, and beaten some individuals alleged to have supported government forces."

The accusations came as rebel forces inside Libya managed to retake a village from Libyan leader Moammar Gadhafi 's forces, and rebel leaders were in Europe meeting with NATO officials and the European Commission.

Mahmoud Jibril, chairman of the executive board of the opposition Transitional National Council, said the complaints represent only a "few incidents" that "took place in the very early days of the revolution, and we've been investigating those cases. We are against any human rights violation whomever is the source of those violations." Those responsible are "going to be brought to justice," he vowed.

In the news release announcing the accusations, Human Rights Watch said its representatives had "witnessed some of these acts, interviewed witnesses to others, and spoke with a rebel commander about the abuses."