Gulf Coast folks will fight for their rights

[cnn-photo-caption image=http://i.cdn.turner.com/cnn/2010/OPINION/07/06/koch.gulf.coast/tzleft.koch.kathleen.courtesy.jpg caption="Coast residents toughed out Katrina, Koch says, and will fight for their rights after oil disaster" width=300 height=169]

Life, liberty and the pursuit of happiness. Our forefathers penned those simple words into the Declaration of Independence 234 years ago as a promise to every citizen of their fledgling country. Today, millions of Americans living along the Gulf Coast find those unalienable rights threatened.

I grew up on the Mississippi Gulf Coast. It was a place of pristine, natural beauty. Miles of soft, sandy beaches. The gentle, warm waters of the Mississippi Sound. The bays that cut inland to rivers and streams lined with grassy marshes and bayous that served as nurseries for tiny crabs, shrimp and all manner of fish and marine life.

This weekend, as the nation celebrated, the first black tar balls and foul patties from the oil spill washed up on the beaches of my hometown. Bay St. Louis was hosting its annual Crab Fest on Friday when the quarter- to fist-size globs began rolling in. My brother called to say he'd spotted some in front of the site of our former home on South Beach Boulevard. It was sickening.

Bet you're wondering what's up at the White House

Only one thing breaks the sound of silence at the White House today – the pounding of hammers outside the north fence as workers construct the inaugural parade grandstand.

President Bush, for the fifth day in a row, has no public events on his schedule. Even the White House briefing has been canceled for the day.
Mr. Bush and the First Lady cast their ballots for John McCain via absentee ballot on October 24th. In every preceding election, the President voted in person at the polls in Crawford, Texas.

At the White House briefing Monday, Perino commented on the president's absence not only from the campaign trail – but from the ballot.

END_OF_DOCUMENT_TOKEN_TO_BE_REPLACED

Sidelined at the White House

Staffers and the media all arrived at the usual time. Read the usual newspapers and wires. Made the usual calls. But there is an odd feeling of just going through the motions... that whatever we do today won't matter tomorrow.

We know we are on the sidelines. Voting is underway. The president has been more or less out of sight since Friday. So there are no events to cover. No briefings. No liveshots.

One thing is certain. It will all change tomorrow.

Heard today around the White House -

"Nothing's happening. Not here, at least."

END_OF_DOCUMENT_TOKEN_TO_BE_REPLACED

Fixing Katrina: Millions of ants can move a mountain 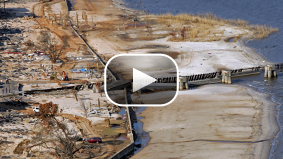 We look back at CNN's Kathleen Koch's visit to her hometown of Bay St. Louis a year after Katrina

Editor's Note: Anderson Cooper 360° is in New Orleans tonight, as Tropical Storm Gustav barrels toward the Gulf of Mexico, expected to reach Category 3. We'll look at whether New Orleans is ready, after being devastated by Hurricane Katrina exactly three years ago today. Watch our special report tonight at 10p ET.

Katrina for me is like a recurring nightmare you have so often that every detail is etched in your mind....the massive debris fields, the stunned survivors wandering shell-shocked through the rubble, the smell of rotting food, rotting vegetation...death.

The Mississippi Gulf Coast was my home. And when we moved there after Hurricane Camille, I always knew there was a chance that our two-story brick house on South Beach Boulevard could be reduced to an empty slab like the ones that still dotted the beach. Curving driveways and stairs leading to nothing.

So driving down the beach after Katrina, searching in vain for landmarks, neighbor's houses, anything to orient myself, I knew what I would find. An empty slab....a pile of bricks...a driveway and stairs to nowhere.

But it was the enormity of the destruction that was most stunning. Nearly all my friends and neighbors, and their brothers, sisters, parents, cousins, aunts, uncles and grandparents had lost everything. I've never felt so powerless. I knew that even as a reporter, any effort would fall short. I felt like an ant trying to move a mountain.

But that's when it began. Mississippians came out of the rubble and started helping one another – some, even before they went to check on their own homes. And volunteers began pouring south from every corner of the country. And I realized that together, millions of ants can move a mountain.