The Beijing Olympics – Are they ready?

Seven years of planning, $40 billion spent – more than for any other Olympics in history. And even now everyone keeps asking: Are they ready?

There is still the constant problem with pollution. But even putting that aside, no one really knows what will work and what won't.

The Olympics have a history of throwing up surprises that even the most thorough Communist planner couldn't foresee.

Perhaps one indication came today on Thursday. The Beijing Organizing Committee for the Olympic Games, known as BOCOG, planned a press conference called "Are we ready?"

It was postponed until Friday.

I guess they weren't ready.

China Quake: Children at the epicenter 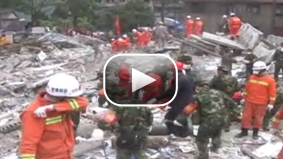 CNN's John Vause reports on the heartbreaking task of looking for survivors of China's big earthquake.

Wanted to update you on the latest rescue efforts in southwest China after the massive earthquake three days ago. The government says the death toll could rise from nearly 20,000 now to more than 50,000.

More soldiers scrambled to the hardest-hit areas, using 110 helicopters. More than 2,000 medical workers have moved to the region.

Parents are waiting at destroyed schools, hoping their children will be pulled alive from the debris.