That's trillion, with a "T"

You can't blame President Bush for not dealing with the economic crisis. You can blame Secretary Paulson for not putting a mechanism in the $700 billion bailout plan Congress passed without building in the enforcement that banks actually provide some of that money to borrowers.

You can also now see that with Tim Geithner coming in from New York, Paulson's old stomping ground, he is focused on creating more than a handout to banks, but something that will allow businesses and families to borrow again.

That is economic stimulus. Some experts project the economy may need up to 3 trillion of it - yes, that's trillion with a T.

From his "Office of the President-Elect" podium, Obama is showing that he is already on the job. This was enough to rally the market yesterday.

That doesn't mean the economy is fixed – it means the Street wants liquidity, and confirms that the Obama and Bush administrations may be working together to get that money out of the banks and into the economy.

Ann Coulter: Wired for Soundbites. Not.

Looks like Ann Coulter, the GOP conservative wing's second favorite woman, just behind Sarah Palin, won't be part of the Inauguration party/funeral, depending on which side of the aisle you sit.

Taking her second fall after the McCain loss, Ann Coulter seems to have her jaw wired shut, if you read New York Post's Page 6.

Coulter threw not just red meat but raw meat to a youth group attending CPAC last February, just after McCain clinched the Republican nomination. She compared McCain to Hitler, except that Hitler had a better tax policy. She also indicated she would not support McCain.

I thought the expression was "break a leg." So how do you break a jaw, anyway?

Center-right is not the U.S., it is the GOP

The main Republican talking point coming out of the shock and awe election last week is that we are a "center-right country." Tell me then, how did Barack Obama get elected by an overwhelming electoral sweep and a decisive popular vote differential? How did the Democrats keep and grow control in Congress?

David Brooks outlined on Tuesday the split between the "reformists" and the "traditionalists" in the Republican party. The center-right tension exists within, not outside, the Republican party. With 51% of people polled saying they want to see a more activist government, the highest number since 1992, surely we are at least a center-center country right now.

A 2007 PEW center poll found that from 1994 till now, 12 percent more Americans feel the "government should care for those who can't care for themselves... even if it means greater debt."

As a political analyst, I like evidence. I like to describe what is, not what is "brandable". The idea that we are a "center-right" country is wishful spin, considering that we voted differently.

Signs of a fierce battle

The eve of the election, the New Hampshire Democratic Party has rolled out a lawn sign campaign where they have copied the style of Senator John Sununu's re-election campaign logo and are actively posting the signs in front of his campaign signs.

In a two-hour period on Monday morning, the "Social Security" sign appeared; joining the "stick with Bush" and "Stem Cell research" signs that sprouted up sometime Saturday night in what appears to be an aggressive last-minute attempt to sway voters undecided voters against Sununu.

FYI saw McCain in Manchester and he was so much better than in states he is less comfortable with. That said, low turnout, feeling of depression among Republicans about his prospects and GOP Sen. John Sununu's.

Ended speech on a high note with the "Fight, fight, fight for what we believe in" shout by McCain. Likely it will not go his way even in the state that knows him best.

btw he is not, as ABC reports, pulling out of NH. He is just pulling some cash out of a state he is already up in, and knows he can't buy it anyway.

If he wants to seal the deal in NH, he'd have to camp out here like he did in the primaries in 2000 and 2008, something he can't do in a General Election. And if he can't win NH, what other battleground states can he realistically do it in? 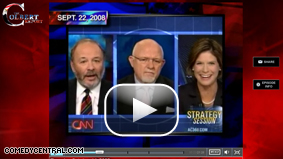