Wu: I'm a dress maker, not a celebrity

"I always say, to do something like that, you have to sort of back it up with more hard work," says Wu about being chosen by the first lady and leveraging the opportunity.

The designer is thankful for the publicity, but prefers not to be in the spotlight. "I've always reminded myself who I am and what I'm here to do," says Wu. "I came to New York to be a fashion designer...at the end of the day, I'm a dress maker. I'm not a celebrity...it's very rare I do TV. I feel comfortable behind the scenes because that's where I have total control. I know exactly what I'm doing. I feel the most comfortable backstage at my shows." END_OF_DOCUMENT_TOKEN_TO_BE_REPLACED

END_OF_DOCUMENT_TOKEN_TO_BE_REPLACED

Best of inaugural tradition and style

Watch highlights of the ceremony and celebrations that commemorated the 57th Presidential Inauguration on January 21, 2013. 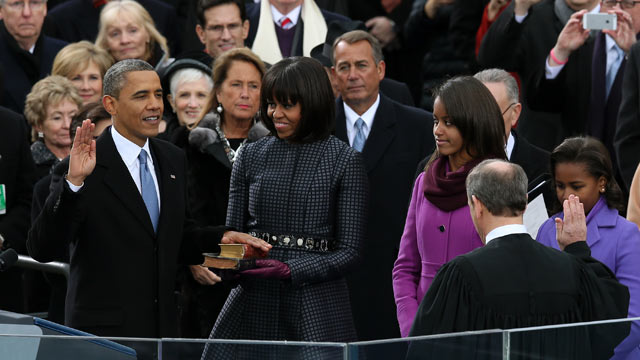 Anderson Cooper was in the National Mall with at least 800,000 others today for Vice President Joe Biden and President Barack Obama's public swearing-in ceremony. The festivities coincidentally fell on Martin Luther King Jr. Day. The celebrations were exquisite, the styles glamorous, and the performances worthy of the momentous occasion – and the night is still young.

After he took his oath of office, the president addressed the nation and called on Americans to come together for a common purpose. The overarching theme was equality. For the first time in an inaugural speech, a president called for gay rights, which received a loud applause from the crowd.

Among the many symbolic traditions, the commander in chief used two Bibles, instead of one, for the swearing-in by Chief Justice of the United States John Roberts. President Obama chose to place his hand on the Bible Abraham Lincoln used for his first inauguration, and a Bible used by King.

Read President Obama's address below and tune in to AC360° at 10 p.m. ET for insight from political insiders and historians, and relive the best moments from the 57th presidential inauguration. Anderson will also speak with inaugural poet Richard Blanco.