Israel and Hamas fight is a test for Egypt

The role Egypt's new government plays in the violence between Israel and Hamas could affect the outcome of the conflict.

Another person has been added to the list of suspects in the January killing of a Hamas leader in a Dubai hotel, bringing the number of identified suspects to 27, two sources told CNN on Monday.

Twenty-six of the 27 were carrying European and Australian passports, authorities have said. The sources - an official familiar with the investigation and a police source - did not say which nation issued the passport the suspect used.

Mahmoud al-Mabhouh, a founding member of Hamas' military wing, was found dead January 20 in his Dubai hotel room. Police believe he was slain the night before, allegedly by the secretive Israeli foreign intelligence unit Mossad.

Hamas is a Mideast reality

Now that the guns have fallen silent and the dust is settling over Gaza, it is time to revisit the received wisdom in Israel, the United States and some European quarters that Hamas is a monolithic, Al Qaeda-like terrorist organization bent on Israel's destruction and that, therefore, Israel has no choice but to isolate Hamas and use overwhelming force to overcome it.

In fact, there is substantial evidence to the contrary. Far from a monolith, there are multiple clashing viewpoints and narratives within Hamas. Over the years, I have interviewed more than a dozen Hamas leaders inside and outside the Palestinian territories. Although, on the whole, Hamas' public rhetoric calls for the liberation of all historic Palestine, not only the territories occupied in 1967, a healthier debate occurs within.

Amid the rubble of Gaza, signs of militant strength

The war had ended just three or four days before. These were signs Gaza's fighting factions were still very much in business and keen to portray their campaign of the last three weeks as a victory against Israel.

CNN's producer in Gaza had been working his contacts. He's well acquainted with Gaza's underbelly.

END_OF_DOCUMENT_TOKEN_TO_BE_REPLACED

[cnn-photo-caption image=http://i2.cdn.turner.com/cnn/2009/WORLD/meast/01/19/gaza.war/art.gaza.prayer.gi.jpg caption="A Palestinian man Monday prays in the rubble of his home, destroyed during Israel's offensive in Gaza."]

Say what you like about Israelis, they know how to play the game. I'm speaking of the humanity game. It's a game with specific rules and expectations in Western civilization. Its centerpiece, the very core of the game, is self-reflection. Demonstrating your humanity (since the Enlightenment, at least, but the roots go back to the beginning) is less about doing and more about reflecting on what you've done. The basic formula is already there at the Delphic Oracle: Know thyself. The trick of it, the reason that the humanity game is hard to play, is that the quest for self-knowledge does not lead to clarity, but down ever deeper into the muck. Knowledge, in the Western tradition, is very much about its limits. Knowing ourselves is thus partly about knowing the infinity of an enigma.

Ari Folman's Waltz with Bashir is a “know thyself” kind of movie. It is obsessed with memory, and memory is the thread around which a self is built. You can't know yourself without memory. The problem is that Folman doesn't remember. Crucially, he doesn't remember anything from his youthful days in the Israeli army when he was part of the Israeli incursion into Lebanon. He decides that he needs to remember, and tracks down a number of his fellow soldiers in order to reconstruct that past. The story is told in animated form. It's a nice move. It creates a distance from the reality of lived experience. It is like drifting through someone else's dream.

The myth of Israel's strategic genius

Many supporters of Israel will not criticize its behavior, even when it is engaged in brutal and misguided operations like the recent onslaught on Gaza. In addition to their understandable reluctance to say anything that might aid Israel's enemies, this tendency is based in part on the belief that Israel's political and military leaders are exceptionally smart and thoughtful strategists who understand their threat environment and have a history of success against their adversaries. If so, then it makes little sense for outsiders to second-guess them.

This image of Israeli strategic genius has been nurtured by Israelis over the years and seems to be an article of faith among neoconservatives and other hardline supporters of Israel in the United States. It also fits nicely with the wrongheaded but still popular image of Israel as the perennial David facing a looming Arab Goliath; in this view, only brilliant strategic thinkers could have consistently overcome the supposedly formidable Arab forces arrayed against them.

Getting aid into Gaza: Deteriorating by the day

Program Note: Be sure to tune in for the latest on the situation in Gaza tonight on AC360° at 10pm ET.

It is noon and things have really started to deteriorate. I just found out some bad news about our staff in Gaza and the events that are unfolding there now.

We just heard from the director of the Mercy Corps office in Gaza City. She told us that Hazar, one of our field coordinators, and her family are stuck in their apartment in Gaza City. Their building is surrounded by Israeli tanks and there is plenty of shooting going on in their area. They are seeking cover in their corridor from the bullets; the shelling of nearby targets blew out the windows in their apartment.

They are anxiously waiting for the cease-fire to take effect which was announced for today from 11:00 to 15:00 to seek refuge elsewhere. It is just past noon and the shooting has not stopped.

END_OF_DOCUMENT_TOKEN_TO_BE_REPLACED 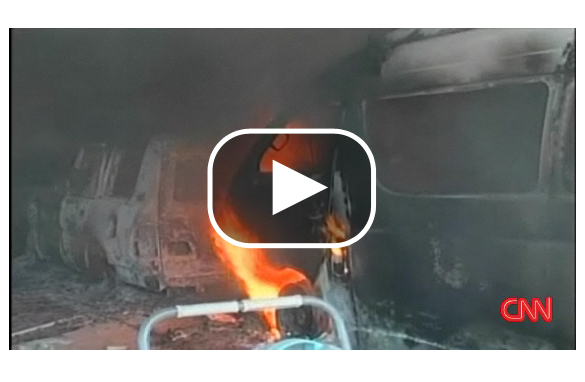