Newtown victim's daughter not giving up

Anderson Cooper talks to Erica Lafferty, daughter of slain Sandy Hook Elementary School Principal Dawn Hochsprung, about why she drove hours to confront Senator Kelly Ayotte yesterday. The Congresswoman voted against the bipartisan gun control bill two weeks ago, calling the regulations a burden on gun owners. “I want answers that no one has given me and I still haven’t gotten them,” says Lafferty.

In a heated exchange at a town hall event in New Hampshire, Lafferty took to the mic and asked Sen. Ayotte about her priorities. “I’m just wondering why the burden of my mother being gunned down in the halls of her elementary school isn’t as important as that?”

Lafferty says the senator dodged the question, as she expected her too. But Lafferty predicts the legislation will be back on the floor this year with a different outcome. She and others plan to continue lobbying for stricter gun control.

A pop, a flash and a life forever changed: Giffords' comeback and gun debate

Gabby Giffords remembers facing her assailant at his sentencing.

"Beady eyes," she said of Jared Loughner, who shot the former Arizona congresswoman in the head with a 9mm Glock pistol. Six people died and 13 were injured that day when the deranged gunman opened fire in front of a Tucson supermarket.

At the sentencing last November, Giffords sat stoically - staring Loughner down - as her husband, Mark Kelly, spoke to the court.

"Well, yes, he had some interesting expressions on his face," said Kelly. "And she did not look away."

In an exclusive, wide-ranging interview with CNN, Giffords and Kelly understand they are now in the center of the heated debate over gun control and background checks, while still struggling to rebuild their lives after that day in January 2011, when their lives changed forever.

END_OF_DOCUMENT_TOKEN_TO_BE_REPLACED

A hidden camera investigation demonstrates how easy it is to buy guns at gun shows without giving identification. CNN's Martin Savidge explains the results of the undercover report.

Background checks are not required for private sales, but the seller is legally obligated to check the buyer's ID to verify that person is not from out-of-state.

The CNN crew that visited Tennessee, South Carolina and Georgia was able to purchase several weapons without having to prove residency or fill out paperwork, but not in every interaction with a seller. In once instance, a seller tells our producer that he got a gun "off a police officer."

The total weapon haul from the weekend was three semi-automatic handguns with extra magazines and one semi-automatic rifle with a 30-round magazine. The total spent was $2,800. No identification was given, leaving zero paper trails. The guns were turned over to CNN security to deal with.

END_OF_DOCUMENT_TOKEN_TO_BE_REPLACED 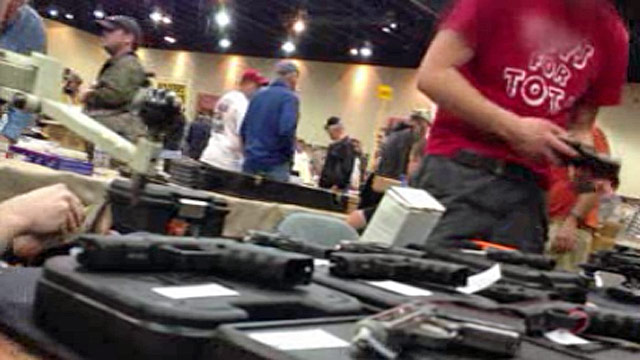 END_OF_DOCUMENT_TOKEN_TO_BE_REPLACED

Nicole Hockley, whose son was murdered, is lobbying Congress for tighter gun control restrictions with other Sandy Hook families. She tells Anderson Cooper about her son, Dylan, and her mission in his memory.

Senator James Risch says expanding background checks will catch criminals, but it won't prevent them from getting guns. Anderson Cooper asks him about his views and why he's part of a group of GOP Senators who are planning to block a debate on gun legislation – he's the only one out of the 14 lawmakers who would agree to talk about it on AC360.

Programming note: Watch the second part of Dana Bash's interview with Gabby Giffords and Mark Kelly on AC360° at 8 and 10 p.m. ET Wednesday.

Gabby Giffords, a powerful advocate for stricter gun legislation, is optimistic about universal background checks. She and her husband, Mark Kelly, spoke exclusively with CNN's Dana Bash about her recovery and efforts to change gun laws.