Army Major Patrick Miller was sitting in an office last April at Fort Hood when he heard gunfire and ran toward the danger. Maj. Miller was shot two inches below his heart. As he fought to survive, Maj. Miller fought to keep the shooter out of the office and he protected those around him. Maj. MIller spoke with Poppy Harlow and described the moment he first confronted the shooter saying "when you see someone in the same uniform as you, the same American flag again on the right shoulder, my thought was to protect them."
Click to watch video
April 2nd, 2014
10:30 PM ET

Retired Staff Sgt. Alonzo Lunsford was repeatedly shot by Major Nidal Hasan during the 2009 shooting at Fort Hood. Hours after another shooting at the same base, he recounts those events for Wolf Blitzer. He also says "instead of pointing fingers, the first act we need to do is embrace the families."

Was the Fort Hood massacre an act of terror?

Army Psychiatrist Major Nidal Hasan, shot and killed thirteen people and wounded more than 30 others, at Fort Hood.  He says he did it for Allah and declared himself a soldier in the war against America and the West.  But the federal government is not classifying the massacre as an act of terror.  That's preventing survivors from accessing much needed benefits, and receiving well deserved honors.  To make matters worse, Major Hasan is collecting thousands of dollars in military pay.  Virginia Congressman Frank Wolf is co-sponsoring a bill to stop pay for alleged violent felons like Hasan.  Retired Sergeant Howard Ray was in the line of fire during the Fort Hood massacre.

Army Major Nidal Hasan has been collecting his military pay since the shooting rampage he admits to committing.  So far that adds up to more than a quarter million dollars.  In the meantime, the survivors say they are being denied services and unable to receive military honors, because the federal government is refusing to classify the massacre as an act of terrorism.  360's Randi Kaye is Keeping Them Honest.

Opening statements began in the Fort Hood shooting court martial today.  Army Major Nidal Hasan admits to killing 13 people and wounding 32 others.  Because this is a death penalty case, Hasan is not allowed to plead guilty.  Instead he will have the opportunity to possibly cross examine the people he's accused of shooting.  Today is day one of the court martial.  CNN's Ed Lavandera has the latest.

CNN Senior Legal Analyst Jeffrey Toobin says the suspect in the Fort Hood shooting doesn't have a legal defense. Army Maj. Nidal Hasan, a psychiatrist, claims a shooting rampage was carried out in defense of the Taliban.

When the judge asked whom he was defending during the massacre he's accused of committing, Hasan replied, "The leadership of the Islamic emirate of Afghanistan, the Taliban." He specifically named Taliban leader Mullah Mohammed Omar.

Toobin calls that defense a "form of suicide by judge" because Hasan knows his argument won't persuade a jury that he's not guilty. If convicted, Hasan could face the death penalty. "He is trying to become a martyr, trying to be executed for this crime."

END_OF_DOCUMENT_TOKEN_TO_BE_REPLACED

The Army officers responsible for prosecuting the Fort Hood shooting suspect will be seeking the death penalty, the suspect's attorney told CNN.

John Galligan - the attorney for the suspect, Maj. Nidal Hasan - said that the filing of a memo by the prosecutors Wednesday indicated that finding Hasan guilty of more than one of the murders would constitute the "aggravating factor" necessary for the Army to seek the death penalty.

Video: Could Hasan have been stopped? 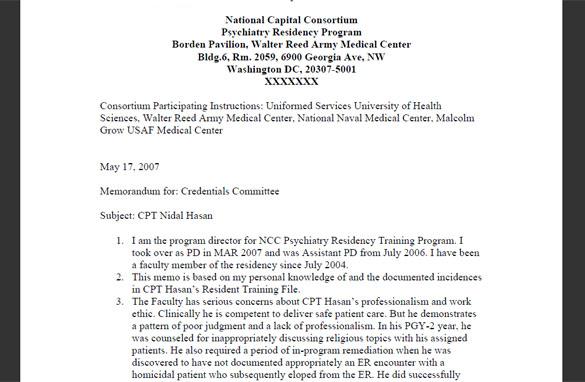 Just hours after the first reports of the tragedy at Fort Hood surfaced, a divisive dialogue was developing on the talk shows and in the Internet blogosphere.

On one side were those arguing that shooting suspect Maj. Nidal Malik Hasan's apparent bloodlust was an unfortunate byproduct of an overtaxed military forced to fight a multifront war against an uncertain enemy.

Television doctors expounded on the prevalence of post-traumatic stress disorder among veterans, often without indicating that Hasan had not been to war or suffered any obvious trauma that could explain the gruesome manifestation of his "stress."