Dr. Phil on why Michelle Knight never gave up hope

Dr. Phil McGraw says child molesters need to be reported because they often are serial molesters.

If you think cyberbullying isn’t really that big of a deal, or just kids being kids, let me throw a few facts at you: More than 40 percent of kids in this country say they’ve been bullied on the internet, and 35 percent say they have received online threats. According to the Cyberbullying Research Center, cyberbullying victims are almost twice as likely to attempt suicide compared to those who have not endured such bullying. Since 2003, at least a dozen young people between the ages of 11 and 18 have killed themselves after some form of cyberbullying.

The Dr. Phil show has been inundated with letters and calls from kids desperate to escape these keyboard bullies - omnipresent, electronic stalkers who go after them day and night, destroy their reputations, if not their lives, and then log off their computers and disappear. For every sickening cyberbully incident you read about — such as the suicide of Rutgers University college student Tyler Clementi, after he learned a roommate had allegedly videotaped his sexual encounter with another young man and streamed it live online — there are at least a half dozen more that never make headlines.

It’s flabbergasting. When I was young, bullies intimidated with their physical size and words. Now, they have Facebook, MySpace, e-mail, texting, message boards, comment fields, blocked calls, instant messaging and chat rooms. And what these keyboard cowards can accomplish with those weapons is exponentially greater than what the old-school bully was once able to do on a playground or in the school cafeteria.

Under the cloak of anonymity, a cyber bully can wage an emotional and psychological war with a few keystrokes — disclosing personal photos, sending group e-mails with the intent of humiliating an individual, sending threatening e-mails, posting embarrassing or mean messages for others to comment on or share. By using false identities, a cyber bully also can make his victim feel that legions of other kids despise him or her.
END_OF_DOCUMENT_TOKEN_TO_BE_REPLACED

Video: Dr. Phil: Verbal abuse can be worse than physical

Anti-Bullying Pledges – Do they work?

[cnn-photo-caption image=http://i.l.cnn.net/cnn/2008/SHOWBIZ/TV/05/02/lkl.dr.phil/art.drphil.lkl.cnn.jpg caption="Dr. Phil is pushing anti-bullying campaigns in schools across the U.S."]

Dr. Phil encourages parents, students and teachers to launch anti-bullying campaigns in schools across the country, much like the one launched at the Barbara Bush Middle School.

Click on the links below to review the three different pledges. Dr. Phil will be on tonight to discuss how to deal with bullying. AC360° at 10 p.m. ET.

Getting through tough times 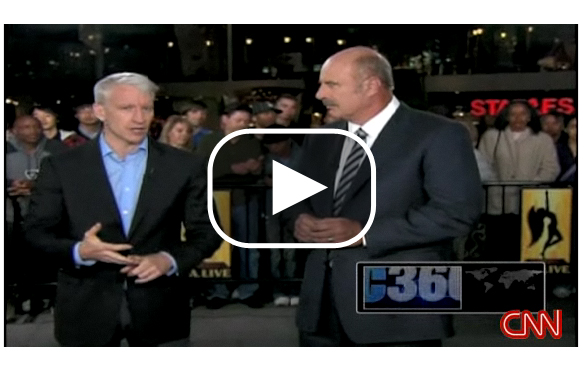 Anderson talks with Dr. Phil about how people who have lost their jobs can cope with their situation.

If you are in debt — and still feel the need to buy all the time — pay attention to Dr. Phil's advice: