Will he or won’t he?

Editor’s Note: He was a division 1 college football player with a pre-med degree… and now the highest distinction for any student: the prestigious Rhodes Scholarship. Myron Rolle has a difficult decision, head to the NFL or head to Oxford? Watch Don Lemon’s full report tonight on AC360°, 11p ET

As interesting as you might find Myron Rolle's personal story and accomplishments, the bottom line is will he accept the Rhodes Scholarship, or go for almost certain millionaire status in the NFL? It’s a tough choice. What would you do?

I didn’t ask him right away. I wanted to save it. I enjoyed the suspense. And frankly, I really liked playing out the scenarios in my head. If Rolle takes the money now from the NFL, he could quickly realize his dream of helping needy children. And who knows if the NFL will even be interested when he returns from Oxford University in England? A lot could change in two years. A Rhodes scholarship, however, doesn’t guarantee riches. But it is an accomplishment that only a select few can claim. Former President Bill Clinton, New Jersey Senator Bill Bradley, General Wesley Clark, to name a few; have certainly made their marks on society. It’s a real moral dilemma.

I met Rolle for the first time at dinner in the player’s cafeteria in the stadium. Rolle wore a designer suit by Sean John and a Burberry necktie; which made me self-conscious about wearing blue jeans and an open collar. The rest of his teammates wore sweats and as they walked passed us mumbled, “hey Mr. President” or “hey Mr. Rhodes.” All in good fun though, it’s obvious how proud they are of him.

END_OF_DOCUMENT_TOKEN_TO_BE_REPLACED

Gustav arrives with a howl

It's 9am here. The winds are howling.

I'm on the 10th floor of the East Jefferson Parish Emergency Command Center.

They need a number to our control room to get the mayor on the air. I give it to them. Time to wake up. 2 hours of sleep is all I'll get today. I've gotten a total of 4 since Saturday.

But there is a storm bearing down. And I have to shoot video and anchor a 4 hour show in a few hours. I'll sleep later.

Anchor opens up about his race

We reached out to CNN's Don Lemon to be part of our 'Black In America' blog coverage, asking for a telling experience, or a moment in his life that could shed light on what it means to be black in America.

What we received was a very personal blog entry. You can read it here. The reaction from the online community was incredible. The reaction from his own family proved equally strong. Don Lemon shares why he wrote the blog, what being 'Black in America' means to him, and what the blog meant to his family.

Here he talks about race in his family… how his great grandmother worked for a white man… and that man raped her: 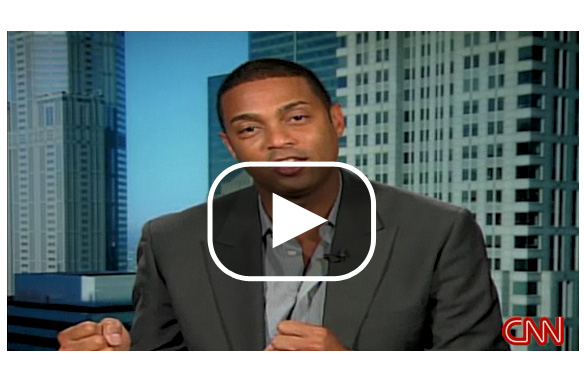 END_OF_DOCUMENT_TOKEN_TO_BE_REPLACED

Black and white, and a target of both

It's 8 in the morning and I'm at flight camp for high school students in Georgia. Most of the students are black teens who claim a real passion for flying. In just a few minutes I get to accompany 17-year old Brandon Henry on his maiden voyage behind the flight controls. He doesn't seem nervous at all, but I certainly am. I have not eaten breakfast. He offers me peanut M & M's. I don't think it's such a good idea to eat right now.

Brandon is a remarkable young man. I admire his passion and commitment to flying at such a young age. What an incredible opportunity. And it made me think about where I was at his age.

A training program like this for minority teens wasn't an option for me in the 1970's in my small Louisiana town. Instead of training to be a pilot or an astronaut or a journalist, at 17 I was trying to not make the same mistakes that some of my older male relatives had made; drugs, babies, jail. There's not much to do in a small town but get into trouble.

Also by 17, I had become quite adept at navigating between three different worlds; the light skin black world, the dark skin black world and the white world. Most southern blacks are very familiar with this. END_OF_DOCUMENT_TOKEN_TO_BE_REPLACED