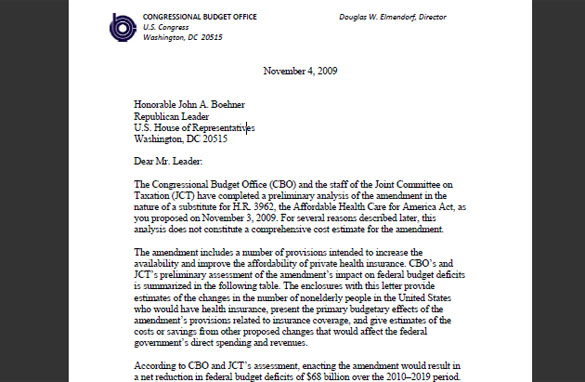 Read the Congressional Budget Office's review of the Democrat's Proposal and the Republican's.

[cnn-photo-caption image=http://i2.cdn.turner.com/cnn/2009/POLITICS/07/29/homeland.security/art.napolitano.gi.jpg caption="Homeland Security Secretary Janet Napolitano speaks at the Council on Foreign Relations on Wednesday."]
Program Note: Stephen E. Flynn is an expert on national security issues. Below is an article Flynn wrote earlier this summer for The American Interest.

Is homeland security still on the nation’s radar screen?

One can be excused for wondering. After all, we’re heading toward the eighth anniversary of the 9/11 attacks and so far al-Qaeda has yet to strike us again. The technicolor national threat level has been frozen at “yellow” since January 2004, and the new Secretary of Homeland Security, former Arizona Governor Janet Napolitano, has mused aloud that maybe it should be abandoned altogether.

The issue was missing-in-action during the marathon 2008 presidential campaign. The presidential transition then came and went without the Obama Administration publicly outlining its plans for the homeland security mission, and there were no expressions of outrage or dismay from editorial pages or by media pundits.

Indeed, the only media spark Secretary Napolitano has managed to generate during the early days of her tenure arose from something she didn’t do: She omitted the word “terrorism” from her prepared testimony before Congress on February 25, 2009.

Dr. Conrad Murray was the cardiologist with Michael Jackson when he died on June 25. On Wednesday, detectives searched Murray's Houston, Texas office as part of the investigation into Jackson's death. Here is one of the warrants used in the search.

Harlem Children’s Zone, a Harlem based organization that helps needy minority children achieve success, has recently gained attention for the success of their Promise Acadamey charter schools. It was revealed in a Harvard study that the three schools, with extended school year and increased hours in the school day , have proven to close the black-white achievement gap in mathematics and reduce it in other subjects.

President and CEO, Geoffrey Canada is now directing his passions towards the fight against childhood obesity. Read the Harvard report below and tune in to Black in America 2 tonight at 8p ETand to AC360° tonight at 10p ET to hear details about Canada's recent community efforts.

[cnn-photo-caption image=http://i2.cdn.turner.com/cnn/2009/US/07/23/gates.arrest.mayor/art.gates.cnn.jpg
caption="Harvard University professor Henry Louis Gates Jr. says he and his attorneys are considering further actions."]
Editor's Note: Posted below is the full police report for Harvard University Professor Henry Louis Gates Jr. from WCVB TV in Boston. For more on the fallout from his arrest, including what his arresting officer is now saying, and the current state of race relations in this country, tune in to AC360° tonight at 10p ET.

[cnn-photo-caption image=http://i2.cdn.turner.com/cnn/2009/TECH/01/12/cell.phone.driving/art.cellphone.driving.gi.jpg]
Program Note: Tonight on AC360°, we will take a closer look at just how unsafe it is to use a cell phone will driving. Posted below is a U.S. Department of Transportation report obtained by the New York Times that outlines the safety complications.

Click here to read the full Department of Transportation report.

[cnn-photo-caption image=http://i2.cdn.turner.com/cnn/2009/POLITICS/07/17/health.care/art.obama.health.care.cnn.jpg caption="President Obama says health care is at the top of his domestic agenda."]
Program Note: For the latest developments in the health care debate, tune in to AC360° tonight 10p ET.

The fight over health care reform took center stage on Capitol Hill Friday, as the House Democratic leadership stepped up its push for passage of a bill before the August congressional recess.

An influential group of Senate moderates, however, broke with both House Speaker Nancy Pelosi and President Barack Obama by releasing a letter urging a slower timetable.

Obama, who has put health care reform at the top of his domestic agenda, was expected to publicly address the issue Friday afternoon.

In urging a slowdown of the debate, the centrist senators cited Thursday’s conclusion by the non-partisan Congressional Budget Office that the legislation now moving through Congress won’t reduce long-term health care costs.

“While we are committed to providing relief for American families as quickly as possible, we believe taking additional time to achieve a bipartisan result is critical for legislation that affects 17 percent of our economy and every individual in the U.S.,” the letter read.

[cnn-photo-caption image=http://i2.cdn.turner.com/cnn/2009/SHOWBIZ/Music/07/14/jackson.children/art.rowe.gi.jpg caption="Debbie Rowe is scheduled to attend a child custody hearing on Monday."]
Editor's Note: In the letter below, Eric George, who represents Debbie Rowe, the biological mother of Michael Jackson's two oldest children, demands that the New York Post retract its report that Rowe had agreed to take $4 million not to challenge Katherine Jackson for custody. For the latest on the fallout from Michael Jackson's death, tune in to AC360° tonight 10p ET.

Editor's Note: On June 29th, a Los Angeles Superior Court judge granted Katherine Jackson's request for temporary custody of her son Michael's three children. Posted below are the documents she filed to gain temporary custody. On Monday, a judge will once again take up the question of who has guardianship of the late singer's three children. To hear CNN Legal Analyst Jeffrey Toobin's take on Monday's custody proceedings, tune in to AC360° tonight 10p ET.

[cnn-photo-caption image=http://i2.cdn.turner.com/cnn/2009/SHOWBIZ/Music/07/07/michael.jackson.wrap/art.mj.mem.family.cnn.jpg caption="Jackson's family embrace each other on stage during the close of the emotional service."]

Editor's Note: Below is Michael Jackson's death certificate from the County of Los Angeles Department of Health Services. For the latest on the King of Pop's death, tune in to AC360° tonight 10p ET.