Ohio inmate Dennis McGuire was executed today for the 1994 rape and murder of a young pregnant woman. He was put to death with a new combination of lethal drugs. Witnesses say he convulsed and gasped for nearly 10 minutes before dying, a scenario that's reigniting debate about the death penalty. Dayton Daily News Reporter Josh Sweigart witnessed the execution and discussed it on AC360 Later.
Click to watch video
November 1st, 2013
12:57 AM ET

The death penalty at a crossroads

A recent Gallup poll shows support for the death penalty is at its lowest level since 1972. States like California have plenty of people on death row, but rarely carry out executions. Andrew Sullivan makes the case, "When you have someone locked up forever and can't hurt anyone, the death penalty becomes a form of vengence" 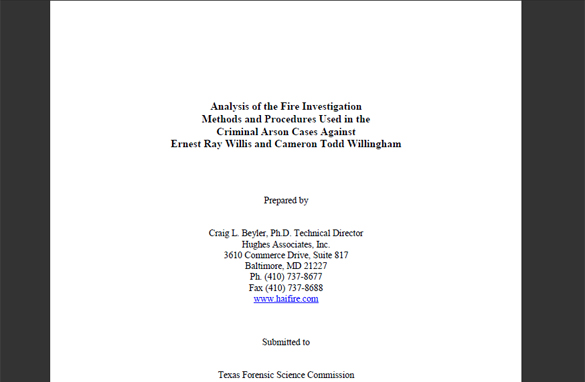 But then 48 hours before Beyler was scheduled to be heard, Texas Governor Rick Perry removed the head of the review commission and three other panel members canceling the commission's review and Beyler's testimony. The commission has not since reconvened.

[cnn-photo-caption image=http://i2.cdn.turner.com/cnn/2009/images/10/01/art.perry.gi.jpg
caption="Texas Gov. Rick Perry has shaken up a state commission that is probing whether a man executed in 2004 belonged on death row."]

Former Gov. Mark White, who was involved in the executions of 20 condemned criminals, says it may be time for Texas to do away with the death penalty.

The death penalty is no longer a deterrent to murder, and long stays for the condemned on death row shows justice is not swift, White said.

More than anything, he said, he has grown concerned that the system is not administered fairly and that there are too many risks of executing innocent people.

White said the state needs to take a serious look at replacing the death penalty with life without parole.

"There is a very strong case to be made for a review of our death penalty statutes and even look at the possibility of having life without parole so we don't look up one day and determined that we as the state of Texas have executed someone who is in fact innocent,” said White.

Current Gov. Rick Perry is facing national criticism for not granting a 30-day stay in 2004 to Cameron Todd Willingham after an arson expert raised questions about the house fire that killed his three children.

Perry ignited the controversy recently by replacing members of the Texas Forensics Commission that were looking into the science behind the arson investigation in the Willingham case.

Perry responded by calling Willingham a “monster” and saying he has no doubt of his guilt.

Texas Gov. Rick Perry has removed a fourth member of a state commission charged with investigating claims that an innocent man may have been executed, his office said.

The Texas governor has now replaced all of the four members that, under law, he is allowed to appoint to the commission. The remaining five members are appointed by the state's lieutenant governor and attorney general.

Perry's critics say his actions are politically motivated, a charge he denies.

The investigation into claims that faulty evidence led Texas to execute an innocent man in 2004 was at a "crucial point" when the shakeup occurred, one of the replaced members said.

Just as our new live trial, New Mexico v. Brandon Craig got underway yesterday, there was even bigger news breaking in the state. Governor Bill Richardson signed into law a repeal of the state’s death penalty.
That makes New Mexico the second state to ban executions since the U.S. Supreme Court reinstated capital punishment in 1976. The repeal, which passed a vote in the state senate Friday and was approved by the house a month earlier, will take effect July 1st and will apply to crimes committed after that date. Once in effect, the most severe punishment will be a sentence of life in prison without the possibility of parole.

Governor Richardson has long been a proponent of capital punishment. But he had the courage to face the fact that our system of justice can never be perfect. He signed the bill because his conscience compelled him to do so. This was the “most difficult decision” of his political life, Richardson said, but “the potential for … Execution of an innocent person stands as anathema to our very sensibilities as human beings.” And he’s right.

If the innocence movement has taught us anything it is that our justice system is not perfect. We make mistakes. Without the death penalty, New Mexico can avoid the kind of fatal error that is bound to happen elsewhere — if it hasn’t already.

We can’t afford the death penalty

From California to New York, dozens of newspapers are declaring that state governments can no longer afford the death penalty.

The outrageous price that taxpayers bear in order to kill a handful of prisoners has been thrown into sharp relief.