Watch the CNN report that China doesn't want you to see

The Chinese government pulled the plug on CNN's feed inside their country when AC360 aired David McKenzie's report on the crackdown on Christians in Eastern China. Christian leaders there are facing the worst persecution in decades. It features exclusive video of police clashing with church members.

Why is the world failing to properly deal with West Africa's Ebola crisis?

The World Health Organization is declaring the Ebola outbreak a public health emergency. The WHO is calling for a coordinated international response to stop the spread of the disease. But so far, there is little sign of that type of effort in countries like Sierra Leone. Davide McKenzie is there and reports on the challenges that aid workers are facing.

This latest Ebola outbreak in Western Africa has already killed more than 700 people. Doctors there are struggling to contain the spread of the disease, which the World Health Organization says has a mortality rate near 90% with no known vaccine. David McKenzie reports from Sierra Leone where he described a sense of panic, but also a sense of fortitude.

Is it possible to stop someone with Ebola from getting on a plane and spreading the disease? Elizabeth Cohen takes a closer look at the precautions.

The search for Flight 370 resumes as families demand more answers

A rough stretch of weather in the southern Indian Ocean cleared. Now planes are taking off and resuming their search for Flight 370. Time is running out to find the plane's black boxes using their locator pings. Some high-tech help just arrived for the crews working to zero in on them. Meanwhile, some Flight 370 families marched through the streets of Beijing voicing their frustration. Anderson discussed the new developments with Kyung Lah in Bullsbrook, Australia and David McKenzie in Beijing.

A Chinese activist who leads a campaign to expose government corruption went on trial today in Beijing. CNN’s David McKenzie was there to cover the high-profile case. Chinese officials intent on keeping the media away roughed him up, and it was captured on video. David spoke with Anderson but that interview wasn’t seen in China; censors cut CNN's feed when the segment aired on AC360.

He had the eyes of the world upon him as he stood just feet from some of the world's most powerful leaders. The man who apparently spent hours signing gibberish during Nelson Mandela's memorial claims he's schizophrenic and was hallucinating at the time. CNN's David McKenzie spoke with the sign language interpreter and Robyn Curnow has the latest on the controversy.
February 18th, 2010
03:31 PM ET

I have been covering Somali piracy for over a year, sailed with the USS Shoup patrolling the waters off Somalia searching for bands of marauders, and interviewed merchant sailors who had been held for months.

But nothing compares to this.

Pirates brazenly attacking a giant US flagged container ship off the coast of Somalia carrying food aid. In the ensuing fight the crew took back the ship, but the pirates made off with their captain in a lifeboat.

In his desperation to escape from his Somali Pirate captors, Captain Richard Phillips tried to escape from pirates on Thursday night by diving off the lifeboat where he was being held to swimming for the nearby US warship, said U.S. officials. The pirates hauled him back.

It was a brave attempt to get loose from his captors who are now trying to spirit him to the lawless Somali shore, according to a source well-connected to the Somali pirate scourge.

END_OF_DOCUMENT_TOKEN_TO_BE_REPLACED 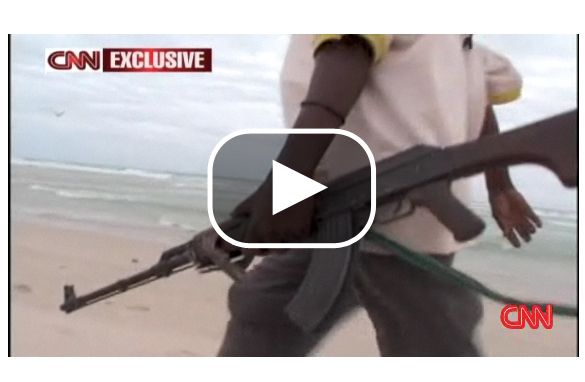