U.N. school used as a shelter comes under fire

At least 16 people are dead and 200 others are wounded after shells rained down on a U.N. school in Gaza. Families with young children were using the building as a shelter from the fighting. Israel says it is investigating the shelling and suggests it may have been a rocket fired by Hamas that hit the school. What is certain is today, young children and babies once again paid the price of war. ITN reporter Dan Rivers reports from Gaza.

New video tells more of the story on the death of deposed Libyan dictator Moammar Gadhafi. Anderson Cooper speaks with senior international correspondent Dan Rivers to round out the details.

‘A Forgotten People’ get attention

It’s one of those ironies of journalism, that we strive to be impartial and independent in our reporting, to stay aloft, watching, counting, calibrating, but not acting or interfering.

As journalists, we strive to be impartial and independent in our reporting, to stay aloft, watching, counting, calibrating, but not acting or interfering.

Yet on occasion, by simply telling people what’s happening in this complex, grey-shaded world of ours, sometimes we journalists do change the status quo. The very act of drawing attention to an issue does sometimes have an impact. 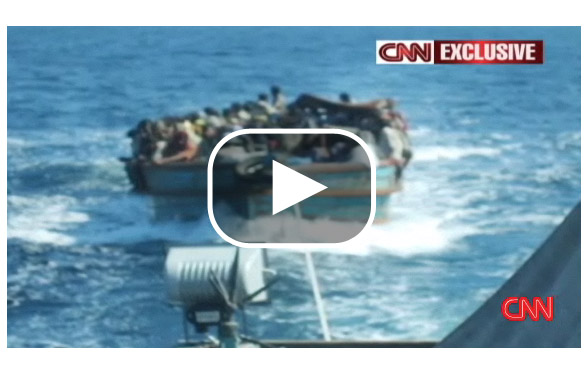 CNN has uncovered new evidence in the scandal involving the dumping of refugees out to sea. CNN's Dan Rivers investigates.

I recently had the extraordinary opportunity to sit down face to face with three of the men who bombed a nightclub in Bali, killing 202 people, including 88 Australians, and ask them anything I liked. Since our interview, the Indonesian government has announced that their execution will take place at the beginning of November. I have already had a lot of feedback - positive and negative - about the interviews.

A colleague who knew some of the 202 people killed in the attack, including 88, Australians, felt the families would have been pleased that finally someone challenged the bombers rationale and twisted logic. Some of the families of victims we interviewed also felt pleased that at least someone had asked the questions they'd never had the chance to pose.

But you can't please all of the people all of the time. One viewer emailed me describing the interviews as irresponsible and sensationalist. I thought long and hard about whether we should be giving these men any publicity and I certainly understand those who think they should not be given the opportunity to speak. But upon reflection, I honestly feel we have a duty to confront these men and counter their ideology – not least on behalf of the vast majority of Muslims who feel their religion has been hijacked by extremists.

For me, one survivor named Chusnul Chotimah summed it up: She received burns on 60 percent of her body from the bomb these men planted. She's an Indonesian Muslim and says it is the bombers, not the westerners they targeted, who are the infidels. She is incredibly grateful that we were able to show them for what they really are – they are not Islamic terrorists, they are simply criminals who have forfeited their right to call themselves Muslims.

Editor's note: Click here to watch Dan's extraordinary and exclusive interview with three terrorists convicted of killing 202 people in Bali, in which he asks them point blank, "What makes you think you have the right to kill people?" Hear their chilling answer.