Video: 'I always thought we would get him,' Rice says

Rice: People will soon thank Bush for what he's done

[cnn-photo-caption image=http://i2.cdn.turner.com/cnn/2008/POLITICS/12/28/rice.administration/art.rice.gi.jpg caption="Secretary of State Condoleezza Rice says "there is no greater honor than to serve this country.""]

Secretary of State Condoleezza Rice said that despite President Bush's low approval ratings, people will soon "start to thank this president for what he's done."

"So we can sit here and talk about the long record, but what I would say to you is that this president has faced tougher circumstances than perhaps at any time since the end of World War II, and he has delivered policies that are going to stand the test of time," Rice said in an interview that aired on CBS' "Sunday Morning."

The secretary of state brushed off reports that suggest the United States' image is suffering abroad. She praised the administration's ability to change the conversation in the Middle East.

"This isn't a popularity contest. I'm sorry, it isn't. What the administration is responsible to do is to make good choices about Americans' interests and values in the long run - not for today's headlines, but for history's judgment," she said.

Overheard by our reporters, during a meeting at the Council on Foreign Relations today:

Secretary of State Condoleezza Rice on the last eight years 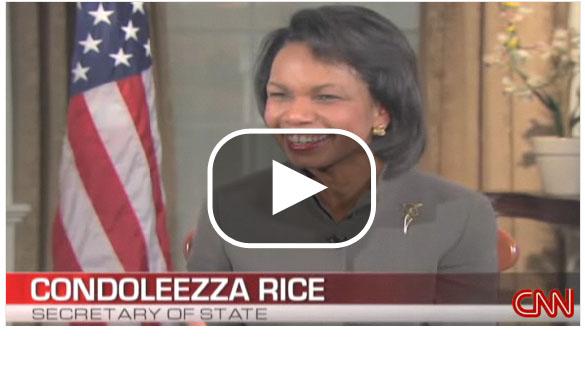 Rice on the last eight years. 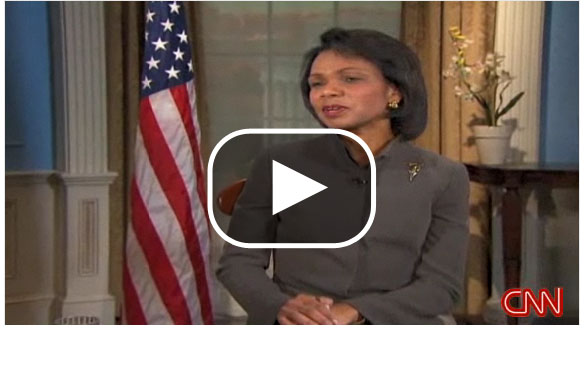 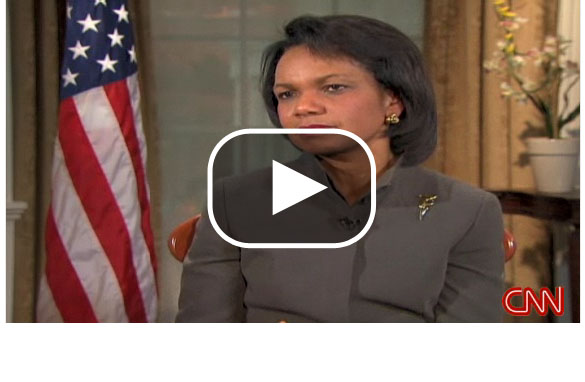 Letting loose: Rice on her daily routine and how she likes to relax.

Read a full transcript of the interview here.

Condoleezza Rice said something a little surprising, in a packed auditorium here at the State Department the other day. She got a little personal about Iraq. The road for the US in Iraq has been "harder, longer, and more difficult than I personally imagined."

Every time we hear Rice speak, or do a one-on-one interview with her, she's careful not to be personal. Usually she's pretty clinical in her responses. I don't think her comments this day mean her views on Iraq have shifted overall. She still believes invading Iraq was right, and that life in Iraq is improving: Iraqis are returning home, the economy's picking up, al Qaeda is weaker. Rice called these developments a "hopeful but fragile turn of events."

Yet the surprises kept coming. This time it was an ambush - of the friendly variety - of one of the top U.S. Generals. He was caught off guard. General David Petreaus was lured to the State Department under the false pretense that he was to give a speech. Instead, he suddenly found himself in the middle of an award ceremony, where he was one of the two star recipients. Both General Petraeus and the US Ambassador to Iraq Ryan Crocker were given the highest award the State Department can give: The Distinguished Persons Award.

Petreaus seemed genuinely taken aback and joked about the speech he had written that he wasn’t to read now. Ambassador Crocker joined the ceremony via satellite and got his award from Deputy Secretary of State John Negroponte - who was in Baghdad. He only got a faxed copy of his award certificate. The real thing is back here in Washington.

Rice praised both the general and the diplomat for their teamwork in Iraq and pointed out the strong bond they have formed over the years. Each man referred to the other as his “wingman.” That was cute.

But Rice warned, too, that despite all the progress, success in Iraq is "not a sure thing."

If polls are right, thousands, perhaps millions, watched John McCain introduce Sarah Palin to the American people and thought, “What about Condi?”

There is no evidence that Condoleezza Rice was ever on Sen. McCain’s short list for vice president. As George W. Bush’s Secretary of State, she would have brought, uh, liabilities, to say the least — in particular, the administration’s troubled foreign policy record.

But it’s unlikely Sen. McCain would have won voters who strongly opposed to the war in Iraq anyway. And, more importantly, polls have shown repeatedly, for years, that the American people never blamed Rice for the mistakes made in Iraq; they blame President Bush, Vice President Cheney and then-Secretary of Defense Donald Rumsfeld.

Any presidential nominee takes a risk when he picks a running mate who brings different, even opposite, qualities than his own to the ticket.

As Sen. McCain introduced Gov. Palin, 44, at a rally in Dayton, Ohio, he couldn’t help but emphasize, for instance, that he turned 72 on the same day. Just Barack Obama’s choosing Joe Biden underlined Sen. Obama’s lack of foreign policy experience, Sen. McCain picking Gov. Palin underscored his lack of youth and, some might say, vigor.

But it was also a mammoth risk. END_OF_DOCUMENT_TOKEN_TO_BE_REPLACED

Marcus Mabry
Author, 'Twice as Good: Condoleezza Rice and Her Path to Power'

If polls are right, thousands, perhaps millions, watched John McCain introduce Sarah Palin to the American people and thought, “What about Condi?”

There is no evidence that Condoleezza Rice was ever on Sen. McCain’s short list for vice president. As George W. Bush’s Secretary of State, she would have brought, uh, liabilities, to say the least — in particular, the administration’s troubled foreign policy record.

But it’s unlikely Sen. McCain would have won voters who strongly opposed to the war in Iraq anyway. And, more importantly, polls have shown repeatedly, for years, that the American people never blamed Rice for the mistakes made in Iraq; they blame President Bush, Vice President Cheney and then-Secretary of Defense Donald Rumsfeld.

Any presidential nominee takes a risk when he picks a running mate who brings different, even opposite, qualities than his own to the ticket.