The Marine Corps is delaying a new physical fitness mandate after 55% of female recruits failed to do the minimum of three pull-ups in boot camp last year. Some are questioning what this says about women's role in combat. Others are questioning why the Marines even have a pull-up requirement. Chris Lawrence has the details.

Ashleigh Banfield discussed all of this with former Marine Corps Captains Vernice Armour and Greg Jacob.

Va. state Sen. Creigh Deeds was stabbed multiple times by his son. Gus Deeds was found dead at the scene from a gunshot wound. State police say they are looking at the case as an attempted murder-suicide. Chris Lawrence reports.
END_OF_DOCUMENT_TOKEN_TO_BE_REPLACED

Shutdown does not stop WWII vets

The government shutdown is not stopping a group of veterans from visiting the World War II Memorial. They showed up by the busload, many in wheelchairs. There was plenty of praise for these vets after the barriers were pushed aside. Some of the vets come the same district where their lawmakers couldn't strike a deal to keep the monument open. Chris Lawrence has the story.
Click to watch video
September 2nd, 2013
11:28 PM ET

Pentagon correspondent Chris Lawrence describes how the U.S. Navy is preparing for possible action against Syria.

Piracy update: Frigate on the scene

The USS Bainbridge is “within a few hundred yards” of the lifeboat holding Richard Phillips, the kidnapped American captain of the Daemsk Alabama, a US defense official confirms.

The pirates have larger “mother ships” nearby. The Navy is aware of their locations and doing surveillance.

The USS Halyburton, a frigate with choppers and guided missiles, is also “in the area” now, which I took to mean it’s not right there on the scene but is in the general area.

The amphibious USS Boxer, which has choppers and a hospital unit, is still “a day or two away.”

Water over the levees 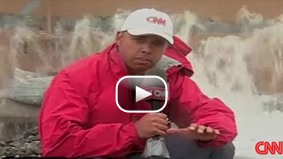 CNN's Chris Lawrence reports the waterflow into New Orleans at one levee is not as bad as it looks.

What an amazing difference a few hours makes.

When we first drove into the area around New Orleans' Industrial Canal, the wind and driving rain were just knocking us all around. We saw rolling waves constantly overtopping the walls, spilling over the levees, and the Port of New Orleans was almost completely underwater.

Then we drove around, further south of where the Industrial intersects the Intracoastal, and saw water shooting out of sections of a flood wall. First thought would be, isn't this how floods start?