Editor's note: In this special, web-only extended version of the interview, CNN's Anderson Cooper talks to Tony Blair about the West's relationship with the Muslim world after bin Laden's death.

Related: Arkansas school board member to resign over anti-gay post

“This is the biggest non-apology – non-apology apology I’ve heard,” Phil McGraw says about Clint McCance in an interview that airs Friday on CNN’s Anderson Cooper 360°. “He did not apologize for what he said. He didn’t apologize for the message that this gives to children, to kids, to parents out there. What he apologized for was saying that suicide was the only out and that he’s sorry for that he said that.”

Clint McCance, the vice president of the Midland School District in Arkansas, took to his personal Facebook page earlier this week and slammed a recent national awareness campaign sparked by a rash of suicides by young people who had been bullied because they were gay or perceived to be gay by their peers.

The local elected official wrote that he wanted gay people to commit suicide, according to The Advocate, a magazine focusing on gay news. McCance promised to disown his own children if they are gay and said he enjoys "the fact that [gay people] give each other AIDS and die."

After his postings sparked national attention, McCance apologized for his comments Thursday in an exclusive interview on Anderson Cooper 360°.
END_OF_DOCUMENT_TOKEN_TO_BE_REPLACED

(CNN) - One of the key aspects to gaining control of the fast-moving cholera outbreak in Haiti is the simplest of human necessities, actor and activist Sean Penn told CNN's "AC360°."

People must stop using contaminated water, he said, noting that they will only do that if clean water is provided.

"So, whether that's through filtration systems or trucked in water, this is going to be the essential element - water, water, water," Penn said in an interview that aired Monday.

Penn, a co-founder of Haitian relief organization J/P HRO, visited Haiti over the weekend - days after news broke about the cholera outbreak in the earthquake-ravaged country.

"It's bad," Penn said of the conditions in the Caribbean nation, devastated by a magnitude 7.0 earthquake on January 12 which killed nearly a quarter million people, left more than 1.6 million people homeless and destroyed homes, commercial buildings and basic infrastructure.

And the cholera outbreak has made a bad situation worse, he said. 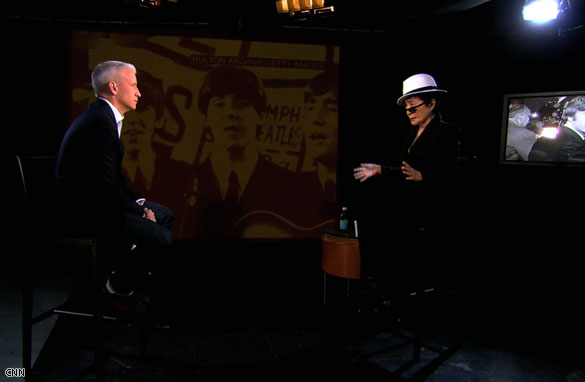 (CNN) - John Lennon would have turned 70 years old this month, and were the late Beatle alive today, he might be sitting in a rocking chair in Cornwall, England, with wife Yoko Ono waiting for a postcard from their son, Sean, Ono said in an exclusive interview with CNN's Anderson Cooper.

But eventually his spirit for activism would have roused him out of his retirement rocker, Ono added.

"I'm sure that, if he got to be 70, then he would have forgotten all of that: No, we have to do something now. And I'm sure this is when he would have been totally activist," Ono said. The wide-ranging three-part interview continues with the second installment on Cooper's "AC360" Wednesday night.

Video: Watch Part 2 of the interview

In the interview, Ono spoke about being unfairly blamed for the breakup of the Beatles and how she can't forgive Mark David Chapman, the maniacal fan who fatally shot Lennon in 1980.

Lovers of Lennon's music should celebrate his 70th birthday anniversary, which occurred October 9, by remembering his expansive spirit, Ono said.