Video: The man behind the bailouts

If insanity is doing the same thing and expecting a different result, the post-crisis pay plans in the finance industry qualify for commitment. The Wall Street financial firms claim to have made some changes, but all the ones we have seen so far are cosmetic, required by statute, weakened by loopholes, or circumvented.

First, the boards of Wall Street financial institutions implemented pay plans that were a major and direct cause of the financial meltdown. These purported bastions of capitalism protected themselves from risk by limiting their downside exposure while taking their pay off the top. Second, rinse and repeat - they took bailout money and kept paying themselves as though they earned it.

I believe in the market. But executives and their boards of directors have hijacked the market to externalize costs and it is doing critical damage to capitalism. The key is always persuading providers of capital that managers will use the funds to create shareholder value and not to enrich themselves. This compensation mess calls that into question.

Financial Dispatch: Another bailout before the ball drops

[cnn-photo-caption image=http://i2.cdn.turner.com/cnn/2009/images/12/30/t1main.gmac.gi.jpg caption="GMAC Financial Services will get a new $3.8 billion bailout from the Treasury."]

Just when it seemed like all the government bailouts were over and done with for 2009, we’ve got word that GMAC Financial Services is getting a third round of bailout money from the Treasury Dept.

The troubled auto and mortgage lender will collect $3.8 billion of additional aid on top of the nearly $13.5 billion already received since December 2008, the Treasury said in a statement late today.

The fresh lifeline is intended to return Detroit-based GMAC to profitability in the first quarter of 2010 and will likely allow GMAC to avoid placing its home lending unit, Residential Capital, into bankruptcy.

This new infusion will also increase the Treasury's stake in GMAC from 35% to 56%, and the government will have the right to appoint two additional directors to the company's board.

As the federal government shovels out billions of dollars, state and local tax revenues fell nearly 7% in the third quarter of 2009 from a year ago. That’s according to a report from the Census Bureau that highlights just how hard the recession has hit states’ coffers.

Sales taxes declined 9% to $70 billion in the third quarter compared with the year-ago period, the Census Bureau said. Income taxes plunged nearly 12% to about $58 billion. Combined, sales taxes and income taxes make up roughly half of state and local tax revenues.

END_OF_DOCUMENT_TOKEN_TO_BE_REPLACED

Loudmouth CEOs, islands in the desert and bringing dead celebrities back to life. Our annual list of the business world's bonehead plays marches on.

For all the complex financial products they can dream up, simple common sense still seems to elude the bright minds of Wall Street. Or at least, Goldman Sachs CEO Lloyd Blankfein.

Hoping to shore up his firm's battered image, he spearheaded an all-out public relations campaign this fall, touting his company's important role in building economies and helping everyday workers prosper.

Last month, however, he got a bit carried away, telling a Times of London reporter that he was just a banker "doing God's work." For $43 million a year.

The Obama Administration is expected to slash the estimated cost of the Troubled Asset Relief Program by $200 billion, effectively paving the way for a massive federal jobs program.

The latest projection, which will be officially unveiled by the White House this week, would cut TARP's price tag by $200 billion to $141 billion, according to a Treasury Department official.

And officials tell CNN that President Obama will recommend using the $200 billion to fund a series of projects - including building bridges and roads and weatherizing homes, as well as providing further aid to the unemployed and to small businesses. That’s expected to come in a speech on Tuesday.

Such a move is certain to draw fire from Republican lawmakers, who have railed against using any leftover bailout funds or money that has been paid back by banks for any new projects.

END_OF_DOCUMENT_TOKEN_TO_BE_REPLACED

Kenneth Feinberg, who was named the White House's pay czar in June, will demand that the seven largest bailout recipients lower the total compensation for their top 25 highest paid employees by 50%, on average, the official told CNN.

For the past two months, Feinberg has been reviewing pay plans at Citigroup (C, Fortune 500), AIG (AIG, Fortune 500), Bank of America (BAC, Fortune 500), General Motors, Chrysler, GMAC and Chrysler Financial in an effort to put these firms in a position to pay back bailout money as soon as possible. 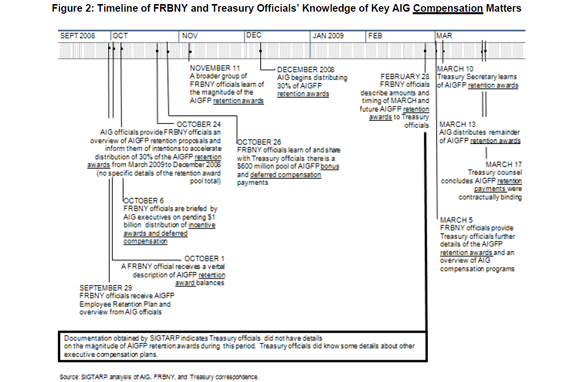 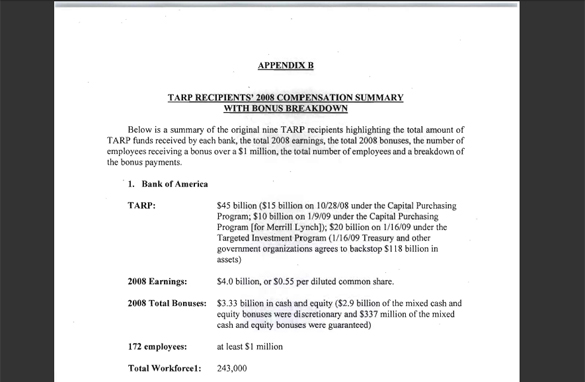 Tonight we're taking a look at the culture of bonuses on Wall Street. This year, the U.S. financial sector is on track to dole out a record amount in bonuses. We are taking a close look at nine of the original TARP recipients, including Goldman Sachs, JP Morgan Chase, Merrill Lynch, and Bank of America. These financial giants were among the first recipients of assistance from the original TARP Package.

New York State Attorney General Andrew Cuomo released a report updating just how the companies distributed their earnings. This report breaks down where all the money went with the specific amounts of salaries, bonuses and government money (i.e. your tax dollars) for each firm.

Check out the full report here. 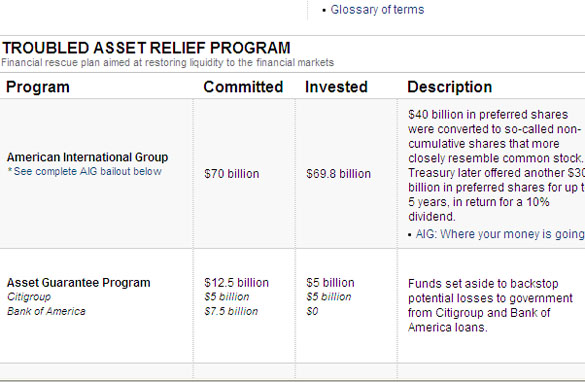 The government is engaged in a far-reaching – and expensive – effort to rescue the economy. Click here to keep tabs on the bailouts.