Elaine Dang is lucky to be alive today.

She was injured in the Nairobi Mall attack, and shared her story of survival with Anderson.

Elaine does not have health insurance in the U.S.

The remaining funds will go to the Kenya Red Cross. 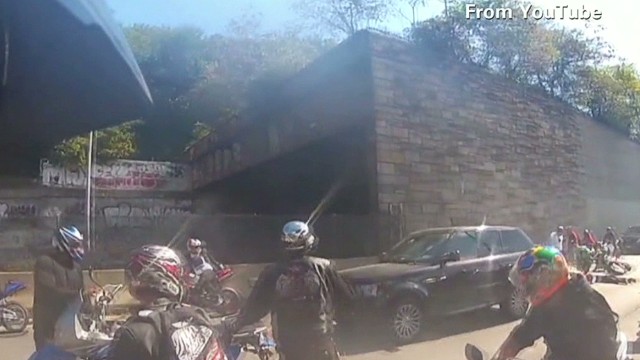 A New York undercover detective is charged with two felonies, first-degree gang assault and first-degree assault, in connection with the beating of an SUV driver on September 29. Wojciech Braszczok also faces third-degree criminal mischief.  Braszczok was riding with his motorcycle club at the time of incident.  Prosecutors say the 32-year-old detective was part of the biker mob that beat Alexian Lien, after he was dragged from his Range Rover.  However, Braszczok never hit him, his attorney claimed today.  Here's the AC 360 411 on the incident:

The number of bikers charged so far in the case, including the off-duty detective.

The number of passengers in the SUV: Alexian Lien's wife and young daughter. Both were not hurt.

The age of Lien's daughter.

The number of black eyes the SUV driver got, as well as cuts to his face and side, needing stiches, according to police.

The number of bikers Lien ran over, including Edwin Mieses who is critically injured.

The total number of bikers who took part in last month's ride, according to New York State Senator Adriano Espaillat.

When the SUV driver called police reporting a gang of motorcyclists driving erratically.

The number of bikers on who surrounded the SUV on New York City's West Side Highway and Henry Hudson Parkway.

The number of blocks the bikers chased the SUV.

The street in Manhattan where the altercation ended, with the SUV driver assaulted, according to police.

The number of water bottles allegedly thrown by the SUV driver from his sunroof toward the bikers, according to an attorney for the biker who shot the edited video of the incident on his helmet camera.

The number of YouTube views of that viral video of the incident.

Tonight on Before AC360 Later

When it comes to basic skills like reading and math, Americans are not quite making the grade compared to what's happening in other countries.
According to a new study, American adults scored below average in math, reading, and problem-solving using technology.
Let us know what you think about all this.

Submit your questions for the chat below starting at 8:45p.
Live video chat begins at 9:15p.

Is it time for the Washington Redskins to change their name?

A Native American tribe is asking the NFL to quote, "stop using a racial slur as the name of Washington's football team." For 80 years, that team has been called the Redskins, which obviously is offensive to many Native Americans. Recently President Obama weighed in on the controversy. Tonight, the AC360 Later panel has their say.

The AC360 Later panel reacts to news police arrested one of their own in the biker attack on an SUV in New York City. The undercover detective not only rode with the group of motorcyclists, he also allegedly hit the vehicle after it stopped.

"Held hostage" by the shutdown standoff

While lawmakers on both sides of the aisle refuse to negotiate, when they address the American people, the tone is largely hostile. Republicans and Democrats continue to make comparisons between the shutdown and a hostage situation. Chris Voss is a former FBI hostage negotiator. He joined the AC360 Later panel with his insight.

Rep. Grimm: "I think there is a glimmer of hope here, but it will take both sides"

New York Republican Congressman Michael Grimm is looking to both parties for a solution to the government shutdown. He joined the AC360 Later panel and  called for Democrats and Republicans to step up efforts to end the impasse. But he warned "on both sides of the aisle there is not the political courage."

Elizabeth Smart was just 14 years old when she was kidnapped from her bedroom at knifepoint and held captive for nine months. She's now 25, and for the first time, she's speaking at length about the horrors she endured. Smart also speaks openly with Anderson about her rescue, and what her life is like today.

Kendrick Johnson was a high school student in Georgia. His body was found upside down in a rolled up wrestling mat in the school gym last January. Investigators ruled his death an accident, but his parents believe someone killed their son and the truth is being hidden. The circumstances surrounding Kendrick's death are more than strange, a lot just doesn't add up. Now, his family is demanding answers. Victor Blackwell has exclusive new information on the case.

An undercover detective is under arrest following the biker attack on an SUV on the streets of New York City. He was not only riding with the group of bikers, but a law enforcement official tells CNN he was caught on video poundinG the vehicle after it came to a stop. Susan Candiotti has the latest.