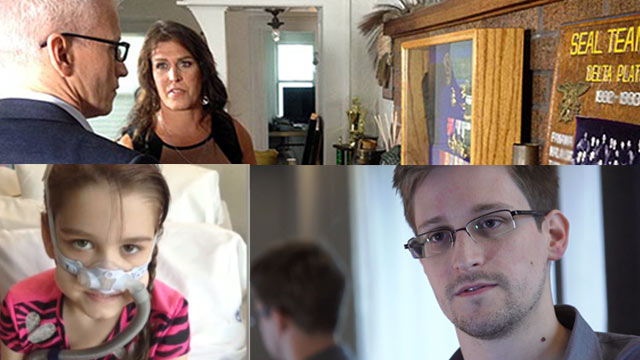 What everyone’s talking about:
A former government contractor employee, Edward Snowden, revealed that the National Security Agency has secret programs to collect records of domestic phone calls in the U.S. and Internet activity of overseas residents, according to documents he provided to The Guardian and The Washington Post. His disclosures prompted reactions from both major political parties in Washington. Republican Rep. Peter King told Anderson that Snowden put American lives at risk and that he believes journalists involved in reporting stories about classified programs should face consequences. However, columnist Glenn Greenwald, the journalist who broke the story for The Guardian, said he was “staggered” by Rep. King suggesting he be prosecuted for his reporting, and King's claims that Greenwald threatened to release the names of CIA personnel. Greenwald called that completely false. As for Snowden, Wikileaks founder Julian Assange had some advice for him: “Go to Latin America." Speaking from the Ecuadorian Embassy in London, Assange told Anderson, "Latin American has shown in the past 10 years that it is really pushing forward in human rights. There’s a long tradition of asylum.”

The man accused of murder, rape and holding three women in his Cleveland home pleaded not guilty on Wednesday. Ariel Castro was indicted last week on 329 counts. Anderson spoke with kidnapping victim Jaycee Dugard’s psychologist, Rebecca Bailey, about how victims cope and rebuild their lives after the trauma endured in captivity.

Sarah Murnaghan’s family received positive news this week: the 10-year-old girl, who has cystic cibrosis, received adult lungs and is currently in the recovery process. The family spokeswoman released a statement on Wednesday that read, in part: “We are thrilled to share that Sarah is out of surgery. Her doctors are very pleased with both her progress during the procedure and her prognosis for recovery … We are elated this day has come, but we also know our good news is another family’s tragedy. That family made the decision to give Sarah the gift of life –and they are the true heroes today.” Anderson talked to CNN’s Dr. Sanjay Gupta about the risks of the lung transplant and how doctors performed the special surgery.

Last week we brought you the story of Kristin Beck, the former U.S. Navy SEAL who came out as a transgender after she spent 20 years fighting for her country as Chris Beck. We have more of Beck’s story tonight in an “Anderson Cooper Special Report: From Chris to Kristin: A Navy SEAL’s Secret” at 10p.m. ET.

In a Keeping Them Honest report, Drew Griffin updates his investigation into cancer charities that abuse and squander your hard-earned donations. Tune in on Monday at 8 and 10 p.m. ET.

A toddler and her daily sippy cup of coffee – on the RidicuList!