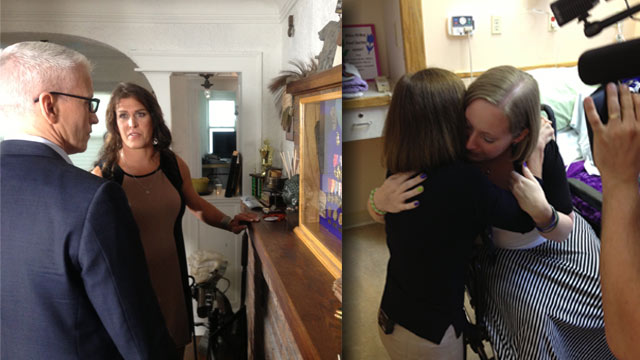 There have been some recent high-profile cruise ship mishaps involving fires, collisions and disabled ships leaving passengers stranded and strapped in their life vests. Is anyone regulating the multi-billion dollar cruise ship industry? The answer may shock you. CNN’s Drew Griffin is Keeping Them Honest.

CNN’s Robyn Curnow went inside Oscar Pistorius’ uncle’s home where the Olympian has been in seclusion since he killed his girlfriend Reeva Steenkamp. Curnow spoke exclusively to his uncle, his coach and agent. Don’t miss “Oscar Pistorius: Brutal Murder or Grave Mistake?” tonight at 10 p.m. ET.

Ever heard of Peter Larson, a.k.a the "Yoda of Dinosaurs”?  The paleontologist is on a mission. We’ll have the story of the dino hunter on AC360 next week.

Former U.S. Navy SEAL Chris Beck spent 20 years fighting for his country. After he retired in 2011, Chris came out as a transgender and began living as Kristin. In an exclusive interview, Kristin told Anderson she wants to be true to herself: “I fought for 20 years for life, liberty and the pursuit of happiness. I want some happiness.” Watch more of her interview Monday on AC360 at 8 and 10 p.m. ET.

A fitness video pranced it’s way to our RidicuList giving Anderson a giggle fit.  A day earlier, Wolf Blitzer surprised Anderson on his birthday and advised him to learn to control his laughter as he gracefully ages.