Erika Brannock could have died from her severe injuries after the Boston Marathon bombings were it not for a good samaritan. Part of Erika's left leg was blown off in the blast and her right leg was broken. A compassionate stranger, who she recalls having the name Joan, made a tourniquet out of a belt to stop the bleeding.

"I had a conversation in my head with God and I told him I wasn't ready to go," remembers Erika. "It was almost instantaneously ... this woman kind of crawled over to me and she grabbed my hand ... she said 'My name is Joan from California and I'm not going to let you go,' and she stayed with me the whole time."

The preschool teacher has overcome many obstacles in her recovery, including 11 surgeries, as well as the fear of another attack. Every time she was wheeled into the operating room, she had to pass the section of the hospital where bombing suspect Dzhokhar Tsarnaev was being treated. The FBI assured Erika that he would never hurt her again.

END_OF_DOCUMENT_TOKEN_TO_BE_REPLACED

What did Anderson Cooper want for his birthday this year? We're really not sure. What he got was some priceless advice from colleague Wolf Blitzer about aging gracefully and controlling that famous giggle. It's a RidicuList surprise with wishes for a very happy birthday from the whole team at AC360!

Dangers of being in traffic in a tornado

Residents in Oklahoma who were commuting home last week when the storm gained strength became vulnerable on the highway. Some may have planned ahead to escape the tornado, but regardless they were stuck on the road and risked becoming the victim of flash flooding.

CNN's Chad Myers says a car is never a safe place to be during a twister. "When a tornado gets done with a car, there's no place left for you in it. The entire thing is smashed to bits," he tells Anderson Cooper.

The Oklahoma Office of the Chief Medical Examiner confirms at least 18 people died on Friday. Three men who lost their lives were storm chasers Tim Samaras, Paul Samaras and Carl Young. Myers emphasizes that Tim was not a daredevil and not carelessly on the road, but a scientist collecting data to better help the government.

END_OF_DOCUMENT_TOKEN_TO_BE_REPLACED

Three years after his diagnosis, actor Michael Douglas told  The Guardian that his throat cancer may have been caused by the human papillomavirus contracted through oral sex. His statement put the spotlight on a larger public health issue.

"What they're searching for is DNA of the virus ... and if they find it, then they can almost definitively say that this was caused by the HPV infection."

END_OF_DOCUMENT_TOKEN_TO_BE_REPLACED

Congressional investigators are looking into the targeting of conservative organizations by IRS employees in Cincinnati. And the Inspector General will issue a report on how the IRS spent taxpayer money for expensive leadership conferences. CNN's Dana Bash reports on both investigations.

CNN's Gary Tuchman reports on a family in Oklahoma that hid from Friday's tornado in a storm drain but tragically died when the drain flooded. 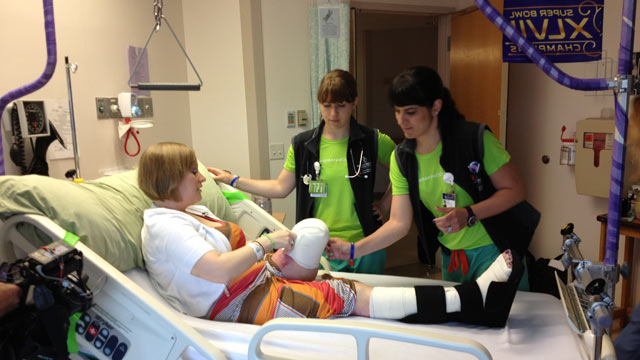 Erika Brannock took the next step on her road to recovery today. The survivor of the Boston Marathon bombings left the hospital where doctors treated her after the attack.

She was the last patient wounded that day to check out of the hospital. CNN's Randi Kaye was with her for the milestone, and will have her story of survival tonight on AC360.

Erika was with her sister and brother-in-law at the finish line; they were there to cheer for her mother who was running in the race. The blast destroyed part of Erika's left leg and her right leg was broken.

She believes she could have died if not for the compassion and quick thinking of a stranger. All Erika can remember about the hero is that her name is Joan and she said she was from California. Joan tied a belt around Erika's leg to help slow the blood loss.

Do you recognize Joan in this picture taken after the bombings? If so, help Erika find the woman who saved her life by emailing  FindJoan@cnn.com.