CNN's Gary Tuchman reports on Bryce Reed, an EMS worker in West, Texas. Anderson Cooper interviewed Reed after the deadly fertilizer plant explosion. Many regarded him as a hero, but now his statements about the incident are facing scrutiny.

Reed is currently in federal custody for allegedly having pipe bomb materials. He plans to plead not guilty to those charges, and his lawyer says he had no involvement in the plant explosion.

Jeffrey Toobin explains the possible legal repercussions of a note by the Boston bombing suspect, Dzhokhar Tsarnaev, stating his motivation. He wrote the message on the inside of the boat where he was hiding in Watertown until he was captured, according to a law enforcement source. He expressed his and his brother's motivation for the attack, calling their actions payback for U.S. wars in Muslim lands. He labeled the victims collateral damage.

At least six people are dead and dozens of homes are in ruins after 13 tornadoes ripped through North Texas Wednesday night. All of the deaths occurred in Granbury, 30 miles southwest of Fort Worth. “We had a total of 97 homes out of 110 that suffered severe damage,” said the town’s Mayor Pro Tem Nill Hulett on AC360° tonight. Watch Randi Kaye's report from Granbury, Texas and read the AC360° 411 on tornadoes:  END_OF_DOCUMENT_TOKEN_TO_BE_REPLACED

Anderson Cooper found the best mayor in the United States. He's got great style and doesn't shy away from the tough questions. Plus, he's adorable.

American aid worker Jessica Buchanan was kidnapped in Somalia. She tells Anderson Cooper the story of her remarkable rescue. After 93 days in captivity and constant fear she would die, she was saved by U.S. Navy SEALs. Hear more of her fascinating story Friday on AC360° at 8 and 10 p.m. ET.

Mayor: Houses have nothing left but carpet

Nin Hulett, mayor pro tem for Granbury, Texas, talks about the damage in his community after a deadly tornado hit.

Arson not ruled out in Texas explosion

Investigators have not ruled out an intentional fire being behind explosions at a fertilizer plant in the small town of West that left 15 people dead, the Texas fire marshal said Thursday.

State Fire Marshal Chris Connealy said investigators were unable to rule out three possible causes, including a spark from a golf cart, an electrical short or an intentionally set fire.

Dr. Kerri Sistrunk says emergency personnel and the medical community came together to help victims in Granbury, Texas. She tells Anderson Cooper that they prepared for the disaster, but never really expected it. 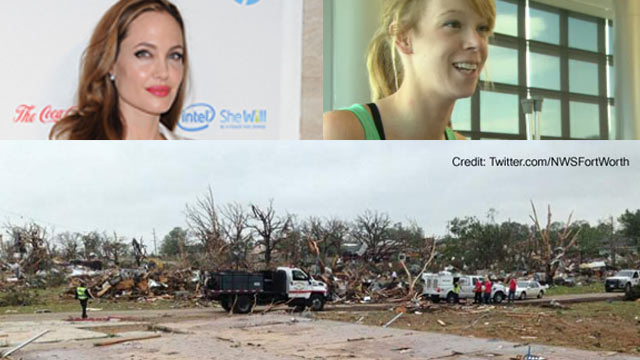 What everyone’s talking about:
This week marks the one month anniversary of the deadly Boston Marathon bombings that killed three people and injured hundreds more. Among the wounded was Adrianne Haslet-Davis, a dance teacher who lost part of her left leg. She has agreed to let AC360° follow her journey back to the dance floor. Adrianne spoke candidly with Anderson about her hardest struggles in the recovery process, including a recent fall that made the amputation seem more real to her. Adrianne jokes that she was “not behaving” when she hopped from her bed to grab something from her closet, but lost her balance. “It definitely woke me up and made me realize that I need to take a little bit better care of myself and slow down.” She is determined to dance again and reminded Anderson of his promise to be her student when she’s ready.

Today we learned a fascinating new detail about the Boston bombings investigation. In a note left on the boat in Watertown, Mass. where Dzhokhar Tsarnaev was captured by police, he wrote that the bombings were payback for U.S. wars in Muslim lands. Details have also emerged about the manhunt for the suspect and his brother. CNN’s Drew Griffin returned to Watertown to investigate what really happened during the shootout between the Boston police and the Tsarnaev brothers.