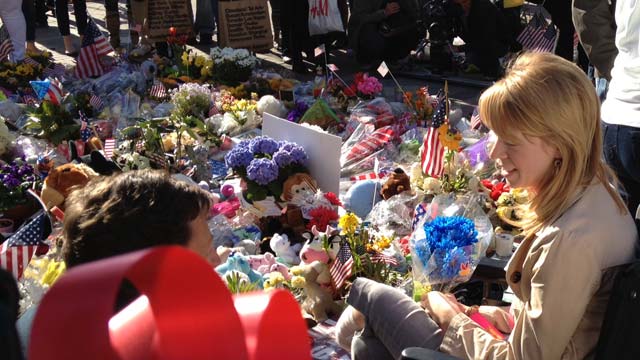 Editor's note: Anderson Cooper is live from Boston tonight on the one month anniversary of the attack. He'll speak with Adrianne Haslet-Davis and show the first installment of a special series on her recovery.

We first met Adrianne Haslet-Davis a week after the Boston Marathon bombings. She had been standing so close to the second explosion that it actually launched her into the air.

“I remember the air hitting me and the impact of the air hitting my chest and stomach and flying through the air and then landing,” she said. “I sat up and tried to move, and I said … there's something wrong with my foot.”

The impact had blown away a large portion of her left foot. Without the heroic work of her husband Adam, who had just returned from a tour in Afghanistan with the Air Force, and first responders, she likely wouldn’t have survived.

After being rushed to the hospital, it was determined her injuries were so severe that she’d have to have her foot amputated. It would be a devastating diagnosis for anyone, but for Adrianne it could also have ended her biggest joy in life – dancing.

“Dancing is the one thing that I do … that when I do it, I don't feel like I should be doing anything else ever. I feel so free and so wonderful,” she said. As a veteran instructor, dancing wasn’t just her joy but also her life’s work.

Despite the enormous challenge of dancing with a prosthetic, Adrianne is defiant – she will dance again. “I feel like somebody has come along and said, ‘Oh, we're not going to let you do that anymore’,” she said, adding, “I'm going to prove them wrong.”

Adrianne is allowing AC360° to join her on her journey. She’s invited us to be there for the milestones of her recovery and she’ll personally film her everyday life – all the triumphs and struggles of her battle to dance again.

If you'd like to help Adrianne, go here: Adrianne's fund