Faced with a difficult decision she never imagined she'd have to make, Heather Abbott had doctors remove her severely wounded foot. She tells Anderson Cooper about her choice and explains why she's optimistic about the future.

Signs of a radical Islamist

Maajid Nawaz used to be a Muslim extremist, but he's now a human rights activist. He shares his unique perspective on the Boston Marathon bombing suspects in an interview with Anderson Cooper.

Stories of heroism, strength, and solidarity have poured out in the aftermath of the explosions that shook the Boston Marathon on April 15 killing three and injuring more than 260. Since that day, Anderson Cooper has been reporting from Boston and has met with remarkable survivors and courageous bystanders who took action.

Anderson spoke to a dance instructor, Adrianne Haslet-Davis, who is determined to get back on the dance floor after losing her left foot. She was thrown in the air from the blast and crawled to a nearby bar with her husband where a stranger tried to use belts as tourniquets to stop the bleeding. Both Adrianne and her husband, Air Force Capt. Adam Davis, are angry about what happened, but they are optimistic about their future: “I am defiant and I want to come out stronger,” she told Anderson. Haslet-Davis was one of at least 14 who are now amputees because of last week’s blasts.

END_OF_DOCUMENT_TOKEN_TO_BE_REPLACED 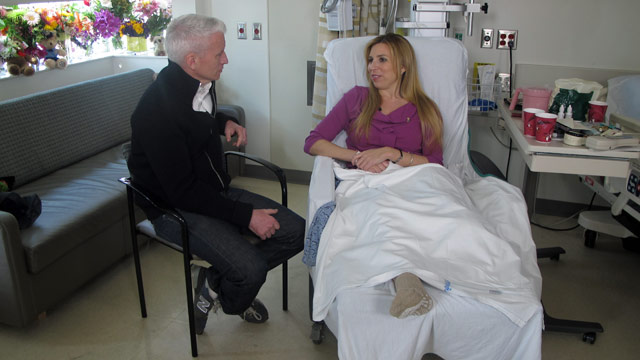 END_OF_DOCUMENT_TOKEN_TO_BE_REPLACED

Learning to walk with prosthetic legs