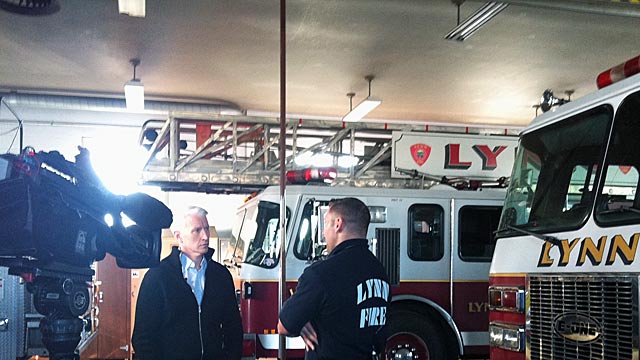 After the blasts at the Boston Marathon finish line, Matt Patterson went toward the chaos and lifted a victim from the ground. Her name is Jane Richard. She was watching the runners with her family on Boylston Street when the bombs went off. Sadly, her brother Martin didn't survive the attack.

In an interview with Anderson, Patterson, a firefighter and paramedic who was off-duty that day, says he had tunnel vision. In the mayhem, the sight of a little girl dazed and badly hurt stood out to him.

He used a belt as a tourniquet on her leg knowing the loss of too much blood could be fatal. He found medics, put the 7 year old in their care and went back to the scene of the bombing to help others.

The doctors at the hospital had to amputate one of Jane's legs. A friend of the Richards told Anderson last week that she's a strong child who will overcome the challenges and be an Irish step dancer again.

Hear more about Patterson's story and how he's reflected on what happened in his city that day. Tune in to CNN at 8 and 10 p.m. ET.