Dr. David Schoenfeld tells Anderson Cooper and Dr. Sanjay Gupta what it was like in the ER when the suspected Boston Marathon bombers were brought there last week. The doctor and the other staff had been treating victims of the attack and were on alert for more patients. Schoenfeld, who lives in Watertown, called his colleagues when he heard the gunfire and explosions early Friday.

"The folks in our department did a fantastic job preparing the emergency department for any number of trauma patients that were going to come in. So by the time I got there, the trauma bays were staffed and ready; the teams were divided up. We had additional staff coming in. The OR was, you know, ramping up. The whole hospital was ramping up," he said.

When suspect #1 arrived at Beth Israel Deaconess Medical Center with gunshot wounds and other injuries, Schoenfeld says their team did what they do with all trauma patients and tried to resuscitate him. He later died at the hospital.

END_OF_DOCUMENT_TOKEN_TO_BE_REPLACED

Dance instructor Adrianne Haslet-Davis lost her foot in the Boston marathon bombing but is determined to move forward. She and her husband, Air Force Capt. Adam Davis, told Anderson Cooper what happened to them immediately following the blast, and why they're so optimistic about overcoming the challenges of Adrianne's amputation.

The 32-year-old crawled on her elbows to find safety in a nearby bar after the explosions. Seeing the severity of her injury, she and her husband, with the help of another person, used belts as tourniquets to try to stop the bleeding.

Adrianne discovered her foot was gone after she awoke from surgery and told her mother that her foot felt numb. She said it was difficult to find out that she was experiencing phantom pains because she no longer had a foot on her left leg.

Over the past week she's processed the horror of that day and the devastating effects, but is determined to dance again. Adrianne has also said she's interested in participating in the marathon next year.

END_OF_DOCUMENT_TOKEN_TO_BE_REPLACED

Next steps in Boston bombing case

A week after the deadly explosion at the Boston Marathon, a suspect was formally charged. CNN's Randi Kaye reports.

Members of the SWAT team who apprehended Boston bombing suspect #2 from the boat he was hiding in spoke to Anderson Cooper in their first national interview. They provided extensive details on what happened during the tense standoff.

It’s important to note that the police officers from the Massachusetts Bay Transportation Authority SWAT team insist they are not heroes and refuse to take credit for capturing Dzhokhar Tsarnaev on Friday night.  They say his arrest was a team effort involving several agencies.

“He was bleeding pretty bad,” Officer Saro Thompson told Anderson about the 19-year-old suspect.  While Officer Jeff Campbell told Anderson Tsarnaev was “weak” from the blood loss and wobbling.  The SWAT team says after they put the suspect in handcuffs, they didn’t know if the boat had explosives on board so they “all ran like hell” to get away from it.

END_OF_DOCUMENT_TOKEN_TO_BE_REPLACED 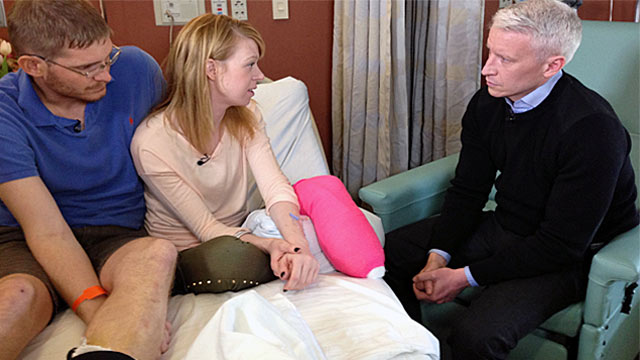