CNN's Drew Griffin reports on the leads Mississippi law enforcement ignored in the 2009 roadside killing of Garrick Burdette. The police recently released information about his death to a local newspaper after Griffin questioned them about the way they handled the case.

Burdette's mother told Anderson Cooper it's hurtful that authorities only contacted her about her son's death after CNN put a spotlight on the story, more than three years later. The investigator apologized to her for letting the case slip through the cracks.

Now police say a suspicious car was at the scene of the incident. The article says a deputy thought about trying to find that car, but didn't. There were other clues about the vehicle that could have helped track down the driver, but there was no investigation.

END_OF_DOCUMENT_TOKEN_TO_BE_REPLACED

CNN's Randi Kaye has the story of how thieves were able to pull off the biggest art heist in history. In an exclusive interview, Rick Abbath, one of the night watchmen on duty the evening of the crime 23 years ago, talks about what happened inside the Isabella Stewart Gardner Museum in Boston.

Celebrities competing in high-stakes high dives in prime-time. A new reality show, with co-host Joey Lawrence, makes a splash on the RidicuList.

New York Times reporter Bill Carter says "The Tonight Show" is moving back to New York with Jimmy Fallon as the new host.

"I don't think they know dates certain when this is going to happen," Carter tells Anderson Cooper. "For one thing, they're now building a studio for Jimmy Fallon in New York, which I think is the real news." The late night talk show has been taped in Los Angeles for 41 years.

Leno, 62, is still a ratings winner, but ABC recently moved Jimmy Kimmel's show to 11:35 p.m, which could factor into NBC's plans.

Carter says despite Leno's popularity, Kimmel may attract younger viewers over time and establish himself as the top choice with the key demographic most important to advertisers.

END_OF_DOCUMENT_TOKEN_TO_BE_REPLACED

Were chemical weapons used in Syria?

CNN's Dr. Sanjay Gupta explains the limitations of the CDC's phone survey that found 1 in 50 children has autism, and talks about why a report released by the same government agency last year put that number much lower at 1 in 88.

"I think in part it depends how you count these cases," says Sanjay. "I don't think there's been that significant an increase, but this is more reflective of increased awareness, an increased diagnosis."

END_OF_DOCUMENT_TOKEN_TO_BE_REPLACED 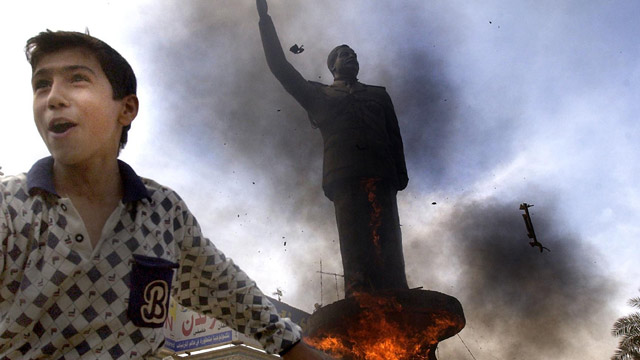 An al-Qaeda affiliated group in Iraq has claimed responsibility for the series of deadly attacks in Baghdad and other parts of the country on the 10th anniversary of the U.S.-led invasion of Iraq. In a statement posted on extremist websites, the Islamic State of Iraq claimed Tuesday’s bloodshed was in “retaliation” against Shiite members of the Iraqi government. At least 61 people were killed and 200 others wounded in two dozen bombings and two shootings, mostly in Shiite neighborhoods. 10 years after the war, sectarian violence continues to plague Iraq. The Iraqis now control their own country, after the last U.S. troop left the country in December 2011. Here’s the AC360° 411 on the Iraq War, 10 years later: