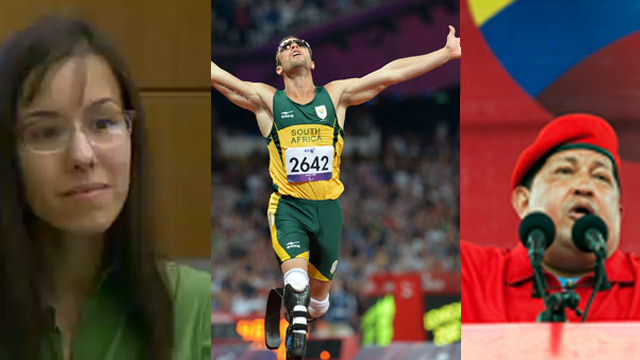 Venezualen president Hugo Chavez died on Tuesday at the age of 58. He was considered a hero to the lower economic class during his 14 years in office. CNN’s Christiane Amanpour and Larry King discuss Chavez’s legacy and the power vacuum left behind.

Jodi Arias has taken the witness stand for 16 days now testifying about her relationship with Travis Alexander and his death in June 2008. Jurors were able to ask Arias questions via the judge on Wednesday. CNN’s Randi Kaye was in court and has the story. Anderson also had a lively discussion with CNN’s Jeffrey Toobin, Mark Geragos, and HLN’s Nancy Grace about the jury’s “perceptive” questions.

Jeff Bush fell into a sinkhole beneath his home when it collapsed while he was in his bed in his Florida home. His brother Jeremy says he heard him scream for help, but couldn’t find him when he searched inside the massive sinkhole. Anderson spoke to Jeremy in a heartbreaking interview. And CNN’s David Mattingly goes inside another sinkhole with geologist Jerry Black who says there are openings in the earth like that all over Florida.

Olympian Oscar Pistorius was granted bail after killing his girlfriend Reeva Steenkamp last month. CNN’s Drew Griffin of our special investigations unit went to South Africa and spoke to some of those closest to Pistorius who say they weren’t surprised by the tragic news. Drew also spoke with Steenkamp’s family in an exclusive interview. They are breaking their silence about her death, their feelings towards Pistorius, and whether she was in love.

Doctors in Mississippi claim they cured a 2-year-old girl of HIV after they started treating the child with high doses of three antiretroviral drugs about 30 hours after birth. Could this medical discovery eradicate HIV in children and adults? Anderson spoke to Dr. Anthony Fauci, Director of the National Institute of Allergy & Infectious Diseases, about the possible medical breakthrough.

A 350-pound African male lion killed Dianna Hanson, a 24-year-old intern, at the Cat Haven sanctuary in California on Wednesday. Tonight on 360°, Anderson speaks to Hanson’s father and brother about the deadly attack. Don’t miss the interview at 8 and 10 p.m. ET.

It’s been 23 years since the largest museum heist in U.S. history at the Isabella Stewart Gardner Museum in Boston, where art frames are still empty on the walls. An Anderson Cooper Special Report “81 minutes: Inside the Mystery of the Greatest Art Heist in History” is coming soon!

A local station’s anchorwoman couldn’t keep it together when reporting on the very serious issue of cat weight loss. Her on-screen laugh attack and others landed on our RidicuList!