A man whose car was stolen by Christopher Dorner says he helped police end the search for the fugitive and wants to collect the reward.

Rick Heltebrake was carjacked at gunpoint by the former LAPD officer on Tuesday shortly before Dorner encountered the police and fled to a nearby cabin where he died. Heltebrake called a friend who is a sheriff's deputy to alert him about the carjacking.

CNN's Randi Kaye asked Heltebrake if he believes he is entitled to the reward although the language stipulated it was to be given for information leading to the capture and conviction of Dorner.

"Did anybody ever believe that he was going to be captured and convicted? I don't think so," he said. "I think they put that in there possibly to have an out for later."

END_OF_DOCUMENT_TOKEN_TO_BE_REPLACED 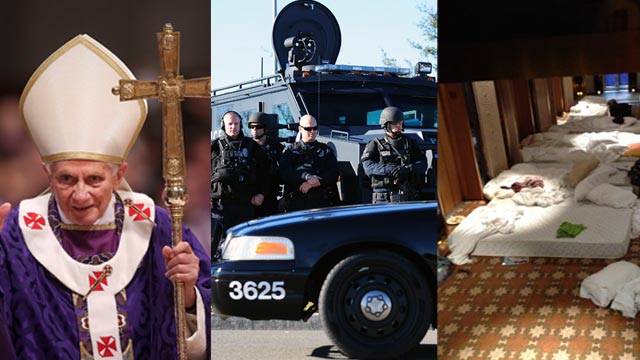 The search for Christopher Dorner is over in California, but law enforcement officials view it as a bittersweet ending. By the conclusion of the manhunt, five people had died, including two police officers. CNN’s Gary Tuchman reports on the battle Tuesday near Big Bear Lake, California, that led to Dorner’s demise. Anderson spoke with Rick Heltebrake, the man who Dorner let go unharmed after stealing his truck to get away from police. Kyle Martin, whose family owns the cabin where Dorner sought refuge before it went up in flames, was determined to see what was left of it – CNN’s Randi Kaye has the story.

Pope Benedict XVI surprised many all over the world by announcing his resignation on Monday making him the first pope to resign in nearly 600 years. Anderson talks to Barbie Latza Nadeau and CNN’s Sr. Vatican Analyst John Allen about the decision and what’s next for the Vatican.