We have been coming to New Orleans every year since Katrina. With each visit we always see a little more improvement. Anyone who was here seven years ago will tell you that this city had a long way to go to rebuild.

It wasn't just the buildings, streets and homes - the residents had to bounce back too. Their spirit has made this town the place tourists from around the world know and love. But they had deep wounds that needed to heal.

Denise Herbert was one of those people. She was displaced after Katrina and had to move to Atlanta with her children. Herbert wanted to bring her 82-year-old mother, Ethel, but she was missing.

END_OF_DOCUMENT_TOKEN_TO_BE_REPLACED

Don't doubt Larry King. But do examine what exactly happened on that date with Katie Couric years ago.

Child may have bonded with abductor

To prove it was him pretending to be a woman in voicemails received by Notre Dame football player Manti Te'o, Ronaiah Tuiasosopo had his voice analyzed.

Fran Townsend and Bob Baer discuss the man who detonated a bomb at the U.S. Embassy in Turkey and why he attacked.

CNN's Ben Wedeman reports from Cairo on the clashes between anti-government demonstrators and Egyptian police.

With your help, they're continuing the conversation they started last night with many others in the "Guns under fire" town hall. What questions did the program raise for you personally about gun violence in America? Leave a comment here or on the AC360 Google+ page, or on Twitter with the hashtag #gundebate360. 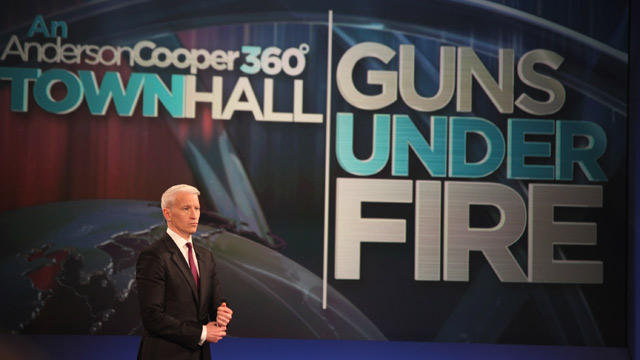 With your help, they're continuing the conversation they started last night with many others in the "Guns under fire" town hall. What questions did the program raise for you personally about gun violence in America? Leave a comment here or on the AC360 Google+ page.

The show included guests with a wide range of perspectives on gun laws and related issues like care for children with mental health issues and the culture of violence.

An NRA board member shared the stage with the president of the Brady Campaign; a man whose father was gunned down in the Sikh temple shooting told his story, and so did a young mom who protected herself and her baby's life with a shotgun when intruders broke into her home.

END_OF_DOCUMENT_TOKEN_TO_BE_REPLACED

Sandy Froman, a gun rights advocate who was formerly the president of the NRA, debated gun background checks with Brady Campaign president Dan Gross at the AC360 town hall on gun violence.

Gross told Anderson, "The reality is that when you go to a gun show you can see what really happens in this country, which is, under the guise of being licensed firearms dealers, people are selling guns to people that they don't know and people who could very well be criminals, be dangerously mentally ill, and people who would be caught if they went through a federally licensed firearm dealer."

Anderson asked Froman, currently an NRA board member, if the NRA has changed its position on universal background checks. In 1999 during a House Judiciary committee hearing, current NRA Executive Vice President Wayne LaPierre stated, "We think it is reasonable to provide mandatory instant criminal background checks for every sale at every gun show. No loopholes for anyone." END_OF_DOCUMENT_TOKEN_TO_BE_REPLACED