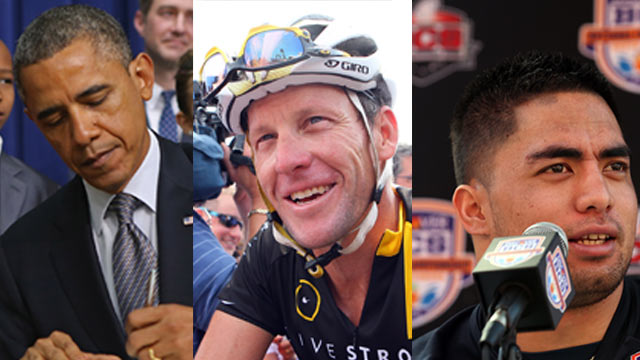 Monday marked one month since the tragic shooting spree in Newtown, Connecticut. Two of the community’s religious leaders spoke with Anderson about how the town is coping. Noah Pozner’s older sister shared how her family’s keeping her little brother’s memory alive and Catherine Hubbard’s mother says she’s taking it day-by-day. Meanwhile, support for the community continues to arrive from around the world in the form of letters and toys. CNN’s Gary Tuchman has the story.

The Newtown shooting sparked a national debate about gun violence, mental health and school safety. Anderson reports on how the victims’ families are mobilizing and calling for legislative changes. The NRA suggested the use of armed security guards at schools going forward; Mark Kelly, former Congresswoman Gabrielle Gifford’s husband does not believe that is the answer. An avid second amendment supporter, Kelly believes that addressing background checks and mental health issues are key.

Conspiracy theories surrounding the Newtown shooting are causing further pain to the families of the victims. It’s not just anonymous Internet users that are making accusations that the attack was staged. A tenured associate professor at a public university is making outrageous claims that the Sandy Hook massacre did not happen in the way it was reported and might not have happened at all. We’re Keeping Them Honest. Anderson also spoke with Salon.com’s Alex Seitz-Wald and Jordan Ghawi, whose sister was killed in the Aurora shootings, about why people believe the theories, and how it affects the families who are targeted.

Jon Hammar, a former U.S. Marine, is free after spending four months in a Mexican prison under questionable gun charge. Anderson spoke to Hammar about the prison’s harsh conditions and how other inmates tried to extort money from his parents.

New York Mayor Michael Bloomberg shared his impression of President Obama's 23 executive actions and the proposals to reduce gun violence. Bloomberg told Anderson he thinks there's a consensus in the country for background checks on all gun sales, but banning assault weapons will be a tougher sell.

And rocking the sports world this week, Deadspin.com revealed that Notre Dame football star Manti Te'o's girlfriend was a hoax. The story about their love, faith, and her untimely death was made up. Te'o says he's the victim, but pieces of the timeline don't add up. Why was he still talking about her in interviews after he allegedly found out she wasn't real? We're Keeping Them Honest. The stars of "Catfish" talk about the dangers of online dating, and writer Joe Simpson of TheAtlantic.com explains how the story spiraled out of control after journalists failed to fact-check.

In the highly anticipated interview with Oprah, Lance Armstrong made a stunning admission. The cyclist was using performance-enhancing drugs during each of the seven Tour de France races he won. The cyclist called himself deeply flawed and admitted to bullying his accusers. Among those who said he's been lying and cheating for years is Betsy Andreau, wife of Frankie Andreau, who is Armstrong's former teammate. Betsy was live on AC360° after part one of the interview with an angry and emotional response. She says Armstrong owed her family the truth, but was not transparent. Watch her reaction and don't miss Anderson's interview with Betsy tonight immediately following the conclusion of the second part of Armstrong's interview with Oprah.

And Anderson speaks with journalist Sebastian Junger about his new documentary “Which Way Is the Front Line from Here? The Life and Time of Tim Hetherington,” which will premiere at the Sundance Film Festival.

When you drive a full day without reaching your destination because your GPS told you so, you might have to reexamine your reliance on technology. The driver in question made a wrong turn onto the RidicuList!