The 610 Stompers dance with Brooke Baldwin in New Orleans on New Year's Eve.

Anderson and Kathy hunt for Ryan Seacrest in Times Square and end up running into Carson Daly. 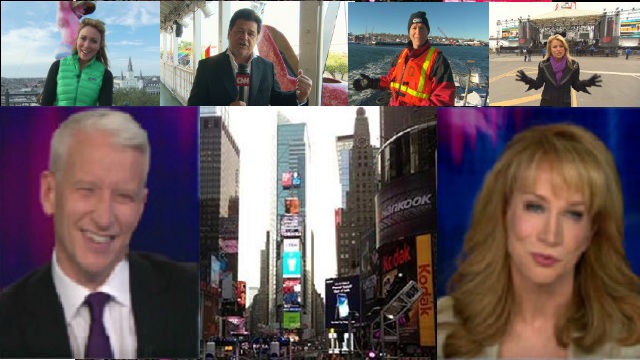 Go Behind the Scenes on New Year's Eve

CNN's reporters have been prepping all day for CNN's New Year's show.

I was all set for my big fancy dinner with my family tonight to mark the end of the old year and the start of the new one, and here I am at the office instead, once again dealing with the fiscal cliff and I have no idea if I will be able to make it to the table before the coffee is served. You and your Congressional pals, Democratic, Republican, and Independent have managed…like a bunch of teenagers with a homework assignment…to put off the task until the last possible moment.

What a sad way to end the year.

Whether we get some sort of deal by midnight or not, I must say it is almost incomprehensible that this is how Washington does business. While you seem to enjoy blaming the endless procrastination on Congress, with all respect, you are part of that equation too.

And you know what I think the real issue is? A complete lack of courage in Washington. While there are some good people in elected office, much of their goodness seems to be trumped by their fear of losing power or position. So they stand for nothing, they take no risks, and they let the calendar run out on their responsibilities over and over again in hopes that someone else will step forward and take a chance on a solution. Then if the proposal works, they can say they liked it all along; and if it does not, they can argue that they were never involved.

Honestly, I’d like to end 2012 on a positive note, but this has eaten at me for twelve months, and it is difficult to burn into the final day watching both parties do it again. Sure, people on each side say they are standing up for their party’s principles, but what I think they are really doing is chanting talking points, ducking responsibility, and desperately hoping the problem solves itself.

So here, in the 11th hour, is a resolution I wish each party would take to heart: Quit wasting time blaming the opposition. Of course the other side opposes you. That is what they do. Start finding ways to get beyond the opposition and make good things happen.

All the best as the year winds down. Call if you want to talk.

Anderson Cooper and Kathy Griffin are back together for an epic New Year's Eve show live from Times Square! The celebration begins at 10 p.m. ET on CNN.

Check out the live blog for photos and updates from our hosts, reporters and producers, and tweet your wishes for 2013 with #cnnnye.

GO BEHIND THE SCENES